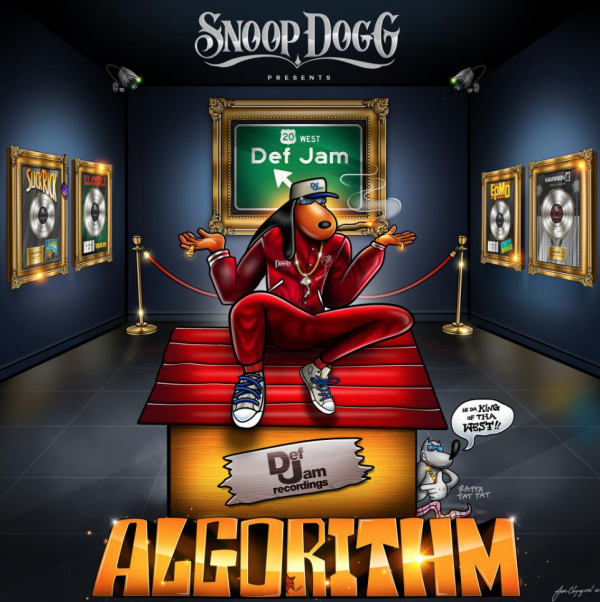 Recently, Snoop Dogg found himself becoming emblematic rap label Def Jam’s Executive Creative and Strategic Consultant. Rather than using this new positioning to focus solely upon his career, instead, Snoop’s first release on the label is a run-through of the finest Def has to offer.

Part compilation, part literal rolling revue through the west coast thanks to some well-placed sat nav directions (“take a left on Crip street”), Snoop Dogg Presents Algorithm's packed out lineup contains sounds ranging from the silkiest R&B to the shiniest hook-laden pop tracks. It’s an overall snapshot of the past, present and future of both Def Jam and hip-hop.

Leading them all through is the needle and thread of Snoop Dogg. From collaborations to a guiding voice, he’s the master of ceremonies - a position that suits him far better than JustEat spokesperson, anyway.

It’s a hell of a showcase with plenty to feast upon. Highlights include Nefertiti Avani's assertive and sexually charged “Make It Last”. “New Oldie”, an ode to those staple songs that make their way into your life, sung through the rich sounds of R&B icon Usher, feels dawdling at first but the sentiment holds its ground enough for you to empathise.

Blxst’s “Go To War” is a chaotically judicious jazz-inflected cut that finds him picking apart the never-ending war of love. The cacophony that runs through the background feels apt for such whirlwind emotions. October London brings reggae into the mix with the excellent clashing of light and dark with the sunny disposition of reggae being clouded by its haunting, black cloud sparseness.

“Big Subwoofer”, a bouncing, bass-driven peek at newly minted supergroup MOUNT WESTMORE - featuring a choice selection of West Coast talent including Snoop Dogg, E-40, Too Short, and Ice Cube. It’s playful, with the four doing their part of keeping up with the new school. It’s in this quarter where Snoop Dogg Presents Algorithm finds its gangsta colours showing. “Murder Music” is a nefariously threatening showing from Snoop, recent Def signee Benny The Butcher, Jadakiss, and Busta Rhymes - harkening back to rap’s most controversial but timeless facet.

Given its scope, parts of Snoop Dogg Presents Algorithm can feel a bit aimless, like the precise calculations are getting caught up in the free flow. A weighty 25 tracks of fresh faces and wrinkled battle-worn ones makes for a push and pull of swaggering persona and modern ideas, but it manages to exclude itself from being an indulgent mess.

A marked chapter for both a legendary label and a legendary name, Snoop Dogg and Def Jam's future seems to be off to a good start. As “Outro”’s robotic voice informs “You have reached your destination,” so it seems Snoop has indeed reached his. Now, knowing the prolific nature of the iconoclast, it’s onto the next one.