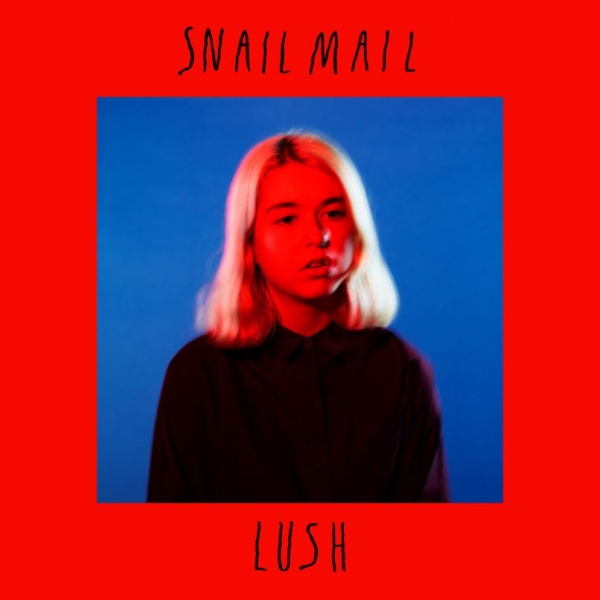 On Lindsey Jordan’s Matador debut as Snail Mail, the teenage guitar-wiz strikes a seriously emotive note, crafting songs about love, personal growth, and coming to grips with reality. Jordan’s heady vocal delivery makes for a worthwhile debut, but her lack of compositional differences and changes predict an unvaried future.

The moment has finally arrived — the hype machine of music media has coughed up another "next best" artist — a yearly/bi-yearly event — and it just so happens to be Matador's latest signee Lindsey Jordan, AKA Snail Mail. A native of suburban Baltimore, Jordan has been playing the guitar since she was five years old, classically trained, and eventually took lessons with Helium mastermind Mary Timony, one of the finest guitarists and songwriters of the ‘90s. Jordan's 2017 EP, Habit, released on the DIY punk label Sister Polygon, brought Jordan to the attention of some major media coverage, and her single "Thinning" quickly became a minor indie-rock hit. Enter Lush, Jordan's debut full-length.

What may seem perplexing on the surface is that Jordan's sound is incredibly well-developed, not just for her age, but for any artist's debut album. It's a feat in itself, both rewarding and, at times, a bit punishing. It may be punishing due to the lack of diversity in her music or tracklist. Jordan's sound is developed, sure, but ultimately, it can grow a bit stale, washed away by throwaway album fillers, found on songs like "Stick," and "Golden Dream," which continue the theme of Lush, but add nothing particularly special to it as a cohesive unit. However, these moments are typically forgotten when you come across songs such as "Speaking Terms," and "Let's Find An Out," memorable songs that mark Snail Mail's place in the indie-rock canon.

It may be facile to compare Jordan to someone like Liz Phair, especially since Jordan was literally in a Phair cover band at one point, but also for the depth her songwriting is capable of, often leading the listener into a state of vulnerability and nostalgia, bringing back some truly painful recollections of our teenage years. But what really brings about comparisons of Jordan to Phair is the generation Jordan has grown up in — almost exactly the one I grew up in — where the mythologizing of an artist is so popular that artists become obsessives, ripping off aesthetics and approaches of their favorite artists, particularly those of ‘90s Matador bands. But to find out how Jordan really got here, let's take it back a decade.

For the past ten years or so, "revivalist" scenes have grown out of nowhere, and have very nearly dominated modern indie rock. The most fitting examples are as follows: the garage-rock revival scene, ignited by the likes of Black Lips, John Dwyer from Oh Sees and Coachwhips, and both the late Jay Reatard and renaissance man Ty Segall's endless collection of recordings and projects. Next comes the emo "revival" scene, which includes the likes of Algernon Cadwallader, The World Is a Beautiful Place & I am No Longer Afraid to Die, Snowing, and You Blew It!, to name a few. The last — and certainly most boring and frustrating — is the dream-pop "revival," though the dream-pop ideology is a bit harder to spot, and a little less tangible than the latter two. Whereas garage-rock and emo are blatant rip offs of past greats, artists instead rip off certain aesthetics or moods that, say, Slowdive, Cocteau Twins, My Bloody Valentine, Mazzy Star, or Asobi Seksu have so proudly recorded for decades. The bands that are clumped together in the dream-pop revival would be Wild Nothing, DIIV, Washed Out, The Pains of Being Pure at Heart, and Youth Lagoon. Again, this is just to name a few.

Now, the tangent may seem unnecessary, but it is indeed fitting for Snail Mail. Jordan was born and raised in the media age, subsequent to any "golden" age that some Internet nostalgists may want to coin, where genres were "pure" and "natural." Within that media age, aesthetics have been not only copied or borrowed, but destroyed by a mass consumer culture endorsing the concept of "hipness." Jordan is simply a product of her environment. It's the age of the revivalist, rather than the revisionist. Let's take it a step further: the bands I had previously listed attached to these hyper-specific genre "revivals" can almost be seen as novelty acts. Yes, some of them are truly great musicians, and all of the above have released at least one record that is completely worthwhile, but in the grand scheme of things, they are directly ripping off their creative predecessors. Take a band like Beach House. Beach House revised "dream-pop," picking up the pieces of past bands and forming a stronger identity than anybody could imagine. Progress was made by revising.

Snail Mail falls into the same category as Frankie Cosmos, (Sandy) Alex G, and Courtney Barnett, a new wave of strictly-business singer-songwriters who are equally inspired by writing perfect, miniature pop songs as they are of 90s' greats like Liz Phair, Galaxie 500, The Pastels, or the Sundays. Jordan is a revivalist, and there is absolutely nothing wrong with that. Her songs are genuinely emotional and, at times, heartbreaking, such as "Pristine," a vulnerable and boxed-in ode to an ex-lover, and again, "Let's Find An Out," a minimal, tumble-weedy midway point of Lush that shows off Jordan's knack for fingerpicking and classical guitar playing. But perhaps the most overlooked and impressive moment on Lush is "Speaking Terms," a song that displays Jordan's extremely specific style of guitar playing, overloaded by quirky tunings and ridiculously shaped chords.

At its core, Lush is partly a remarkable debut, for the solid shape it's delivered in, mostly cohesive, conceptually speaking, but it's true that the cohesiveness of Lush lacks any true dichotomy to "spice" up the album. What you see and hear immediately is exactly what you get. That's not necessarily a bad thing. However, it's a factor that should be sat on in preparation for future Snail Mail releases. Jordan is capable of writing brilliant and mature love songs, but the act is clearly capable of growing old, tiresome, and taxing. In the meantime, let's enjoy some of the truly remarkable songs that Jordan has come forth with, and hope that the latter doesn't happen in the near future.