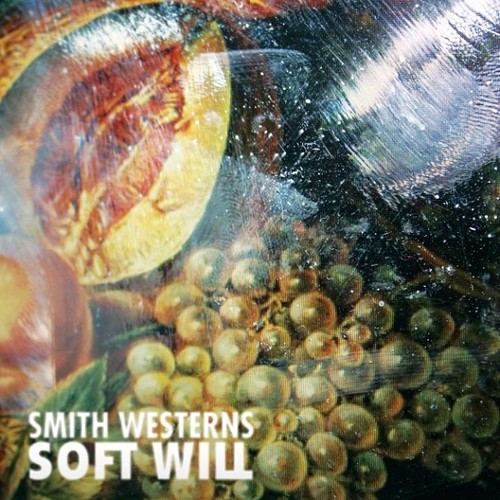 What’s immediately obvious about Soft Will is how studied, pretty and personal it sounds. Hardly radical qualities for an indie rock record in 2013, but Smith Westerns are a band who delivered the line “Do you think is it normal / to go through life oh so formal?“ with all the withering snark you’d expect from a group who skipped college to put out two records of scrappy rock equally indebted to Nuggets as David Bowie. They’re the kind of band who couldn’t even deliver a sentiment as gentle and banal as “I wanna hold your hand / and make you understand” without punctuating it with archly ironic “woo-hoos!”, the aural equivalent of an eye-roll and weary sigh.

And yet half a minute into Soft Will Cullen Omori delivers this: “please keep close to me / I don’t wanna let you off my arm”. There’s no Beatles-quoting distancing or tongue-in-cheek subtext. Indeed the song itself, ’3am Spiritual’, is a notably different thing from what we’ve heard before: weightless, cloud-hopping, a million miles away from the reedy, scuzzy rock the band traded in before, but still really quite splendid. Even the wordless vocal hook – a soaring, festival-ready “whooooa yeah” – that accompanies it only adds to the serene, music-box pretty atmosphere, rather than archly deflating it.

Of course Smith Westerns are all of drinking age now; their normal-world friends have graduated from college, become young professionals, and in a sense Soft Will works on a similar sort of so-this-is-my-life analogue to all those (briefly) optimistic young adults. The album is populated by starry-eyed tracks that plop the band in as yet uncharted aesthetic territory that owes a debt to bands like Galaxie 500 and Beach House rather than Bowie and Bolan. Some of these expeditions don’t work, like ‘Only Natural’ and ‘Cheer Up’ – while some do, like ‘Idol’, with its gorgeous, jewel-encrusted guitar line and sparkling undertow, and ‘Glossed’, which features a ‘Hotel California’-style intro and driving rhythm section; more ambitious still, it even boasts its own track-long coda ‘XXIII’, which, most surprisingly of all on the record, sounds like early Pink Floyd, when they were doing movie soundtracks like Zabriskie Point and Obscured by Clouds – perhaps the last sound you would expect from Smith Westerns. More impressively, it sounds pretty good.

There’s a lot of grit and introspection on the record, too. Soft Will is littered with hippie-ish moans that reveal a nervy unwillingness to dive unreservedly into adulthood. On ‘Fool Proof’ Cullen murmurs, as if asking himself, with quiet desperation, “Have you lost control?” amidst a deceptively calm sea of soft, shimmering guitars. ‘White Oath’, a slow building, relatively straight-forward rock anthem and album highlight, details a kind of millennial anhedonia (“chain smoke my days away, wrote my poems / even though no one would ever read them”) and features the closest thing to that reedy, electric guitar snap that propelled tracks like ‘Weekend’. Rather than the ecstatic, drunken fillip we’re used to, here it sounds like a beautifully mournful, blues-y collapse that temporarily halts the song’s cresting mantra (“I’m trying to catch my breath”).

In many ways Soft Will feels like the kind of album a band who’ve made a living off of coming-of-age screeds would make once they’d come of age. It’s contemplative, open, almost apologetic for the sometimes fratty band they used to be. And while some will miss that scrappy, grab-bag approach to genre that marked their first two records (dreamy melancholia isn’t quite a tone they can exploit for a whole album, as testified by the album’s end-of-record slump), that they’re no longer the the wunderkids salvaging shamelessly from the 60′s and 70′s, sticking disco percussion in their songs, or ripping off ‘Get It On’ vibes – on balance, a good thing. For all its faults, the heart and maturity at the centre of Soft Will feels more vital and important than their showy genre tourism ever did.