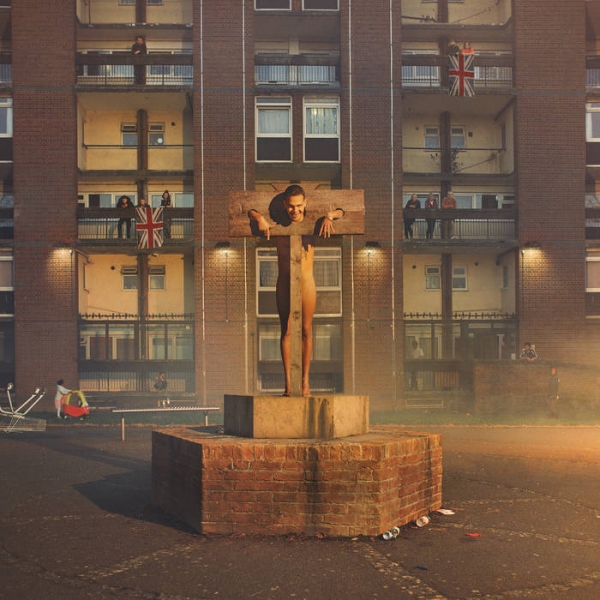 On his debut album, slowthai has found a new artistic gear and in the process made an 17-track blueprint for UK rap’s post-grime future.

In his short career to date, slowthai has been surprisingly misunderstood for a rapper whose lyrics are refreshingly direct. Most notably, when “Drug Dealer” an arresting song about the limited options available to working class young people, was perceived by some as a deliberate attempt to glamourise criminality.

Having broken through in 2018 on the back of raucous single "T N Biscuits", the Northampton rapper - real name Tyron Frampton - has developed a reputation as one of the brightest young stars in UK rap. Still, it takes a decent amount of character to title your debut album “Nothing Great About Britain” even if to do so would be completely on brand. Fortunately, Frampton is lacking in neither personality or confidence and this underpins a willingness to be different that is remarkable among UK rappers, for whom commercial success usually comes from conformity.

For what it’s worth I think the name is genius. It’s a four word riposte to the legions of people up and down the country who’d rather people like slowthai, talented, young mixed race people with a criminal past, stayed away from our national conversations around history and politics. And besides, he doesn’t really hate Britain. No one can make art this good about something they truly hate, especially considering the care he takes rendering the characters that populate his songs. Indeed, slowthai identifies so much of what’s great about Britain that he’d probably have been better off ending the album’s title with a question mark.

Slowthai has earned his status as one of the most touted names in UK rap by consciously rejecting the basic premises of American trap without taking too many cues from UK grime. The beats are too sparse and slowthai’s flow too disoriented. But there is energy in abundance particularly on lead single “Doorman”. The difference here is that where his previous singles like “T N Biscuits” caught the eye by being in your face, there’s a positivity at the heart of “Dead Leaves” and Gorgeous” “that reveals itself on repeated listens. “Carpe Diem / Don’t just live for the weekend” he raps on the former.

Both features on the album come from grime artists and while Jaykae’s verse on “Grow Up” is genuinely enjoyable, it’s Skepta’s contribution to “Inglorious” that stands out on tracklist. Predictably, Skepta’s verse delivers, particularly given that his smooth flow gels with slowthai’s more erratic style.

Seeing slowthai lean into his grime influences definitely shows he has another gear but it realistically sets a high standard for intensity that the following tracks can’t match. Single “Peace of Mind” seems pedestrian in comparison and to be totally honest, slowthai’s witty rebukes start to sound thin after the listener has shared his perspective for 25 minutes.

The autobiographical "Northampton’s Child" is a fitting end to the album though. It’s easily the most heartfelt and emotionally gripping track on the album. Apparently his mum cried on hearing it for the first time and it’s not hard to see why, considering the way it earnestly documents the highs and lows of Frampton’s childhood.

Overall, this is not only a debut stuffed full of but also a well-timed reminder that the best music comes when an original perspective is allied with an arresting personality. “Nothing Great About Britain” is a little rough around the edges but the hallmarks of all good rap are here in abundance: tight production, memorable punchlines and a keen sense of when to be rebellious and when to be revealing. “Nothing Great About Britain” is less of an album than a tour of slowthai’s life to date that goes from a council estate in Lings, Northampton to the opulence of London’s Mayfair. It’s at times a brutal listen, but hidden between the hard knocks is the sound of a charismatic young artist who knows he’s making a debut album to remember.