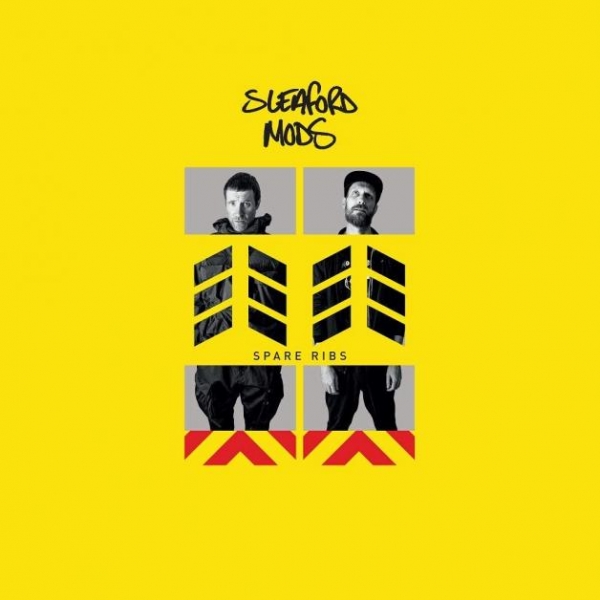 If you’ve not been following the antics of Sleaford Mods’ mouthpiece Jason Williamson during lockdown, you’ve been missing out.

This is the sixth album Sleaford Mods have released in their current iteration (Williamson is joined by Andrew Fearn, the notoriously reticent sample-maker and beat-technician), and their eleventh overall – and it’s also one of their best.

One of the very few criticisms levelled at the band is that the majority of their material sounds largely the same, or that the basic ‘Sleaford Mods’ template is to make a song which comprises one man shouting over a looped bass line or some garbled beats. The truth of the matter is that for the most part, those criticisms are true, but what they miss is the nuance and the experimentalism in SM’s sound. With this new album, Spare Ribs, the band have begun to diversify and change in some wonderful ways – ways that ensure even their most fervent detractors haven’t got a leg to stand on.

For one, the bass lines are somehow weirder and stranger, and they seem to be drawn from a wider range of influence: depending on who you are listening to outside of Sleaford Mods, you’ll likely hear snatches of The Cramps or The Damned (particularly on “Shortcummings”), or maybe The Clash (“Thick Ear”). Or maybe you won’t. In this tension lies the core appeal of Sleaford Mods: their sound is so open, so expressive that there’s ample room for interpretation. Spare Ribs is no different, and their increasingly playful approach to songwriting means that throughout the album we’re given a variety of different sounds feels with which to experience where the band are at in 2020.

From the gnarled, experimentalism of the intro track “A New Brick”, to the stunning closer “Fishcakes”, we’re led through a variety of different, kaleidoscopic versions of what Sleaford Mods do. There’s the woozy, nauseating electronic buzz of “I Don’t Rate You” sandwiched right next to the flippant rap “Thick Ear”, and the unusually melodic “Glimpses” – which has got a stainless steel hook – next to the glitching, gloopy “Top Room”.

Things take a decidedly gloomy turn on the Billy Nomates-featuring “Mork N Mindy”, with some reflective, poisoned-nostalgia lyrics and some trip-hoppy Burial-esque pools of bassy darkness. Amy Taylor, of Amyl & the Sniffers, turns in another solid-gold guest spot (after featuring on last week’s Viagra Boys record), and the whole thing is bursting at the seams with lyrical zingers about class tourism and poseurs standing outside high-rises. The vitriol towards class appropriation (three guesses who these are about) continues on “Elocution”, which takes a swipe at bands who pretend to be aware of social issues, but ultimately hope to escape the conditions that make the issues relevant to them.

As always, Sleaford Mods are exactly what you expect them to be. Caustic? Sure. Groovy? Absolutely. Topical? You betcha. But what they also bring with them this time – as if that hasn’t been abundantly clear – is a freshness, and a revitalized sound that offers them new sonic avenues to explore down the road. Spare Ribs is not only a great album, it’s an essential album to kick off 2021.