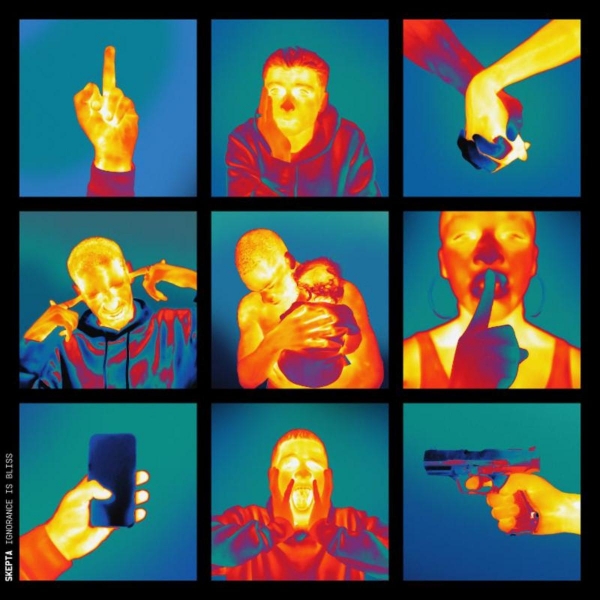 Although a stalwart of the grime scene since its origins at the dawn of the millennium, Skepta became a true household name as grime re-emerged to wider popular culture in 2014 with his track “That’s Not Me”, followed in 2016 by the Mercury-winning Konnichiwa.

“That’s Not Me” deliberately evoked, both sonically and lyrically, the anarchic spirit of early grime - a genre which all-but collapsed as many of its young innovators succumbed to the allure of short-lived chart success via naff pop singles (Skepta himself included).

In 2019, grime has yet again slipped from the very apex of pop culture, though a healthy underground scene still thrives and a handful of breakout stars (Stormzy, Wiley, JME et al) remain enormously influential. Despite the genre’s shift in prominence, it has left behind a wealth of revered home-grown talent, and Skepta retains his place at the forefront.

With Ignorance Is Bliss, we are presented with an album that, unlike Konnichiwa, is unburdened with the weight of expectation. I would hesitate to refer to this album as development in maturity, though perhaps a certain sense of introspection comes across on tracks like opener “Bullet From A Gun”.

However, I think this is quite a tired way of looking at the album: the subject matter here is hardly uncharted territory. The strength of the record comes from the distinctiveness of Skepta’s flow. There’s a clarity to his delivery, augmented by a sly sense of humour, often switching from simplistic word patterns to suddenly saying something in a disjointed, intentionally elongated way. It’s a consistently exciting performance technique.

Standout tracks such as “No Sleep” work best because of their simplicity. Make something that sounds good, loop it, let’s go! It’s a formula that Skepta has long been fluent in, but this by no means makes it any less satisfying as a listener. There is an effortlessness to the execution that is undeniable. This isn’t to say there aren’t flourishes; in particular the ending “Same Old Story” where the melody is suddenly played on a mobile phone keyboard or the somewhat unexpected interpolation of Sophie Ellis-Bexter’s “Murder on the Dancefloor” on “Love Me Not”.

Production-wise, the album is unashamedly (and thankfully) steeped in the sonic hallmarks of classic grime. Synthetic, toy-like instruments bash out simple yet incredibly catchy melodies, laid atop snappy percussion and vaulting low-end.

The weaker points of the record usually come with the guest artists - most notably on the hooks. The J Hus feature on “What Do You Mean?” makes complete sense on paper, and the song is a passable riff on early-noughties hip hop, though in the end it all feels a bit flat. Same goes for the features on the above mentions “Love Me Not”, which reinforces my theory that every UK MC’s album this year seems to have an obligatory 2step garage tune.

Thankfully a more overlooked facet of grime’s genealogy* continues to appear in Skepta’s music with “Redrum” and “Greaze Mode” each taking cues from various eras of southern hip hop.

Overall, there is something deeply satisfying about the majority of the album, anchored by Skepta’s unique vocal delivery and a sonic playfulness that he has long perfected. Skepta has proven himself a pioneer at several points of his career, now it’s just good to him hear at the top of his game.