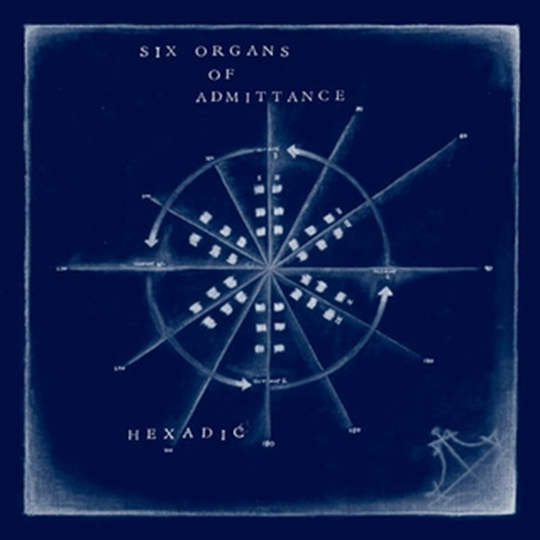 There’s some serious method to the madness of this new record from Ben Chasny, his first under the Six Organs of Admittance banner since 2012’s Ascent. The usually prolific guitarist has spent the past few years devising a compositional process called ‘the Hexadic System’, which involves drawing from playing cards to allow chance to determine elements like tuning, tonal intensity and even lyrics in songs. Chasny has applied the approach here and the exam question seems to be whether it can produce serendipitously compelling music.

The idea of taking of taking these avant-garde concepts and applying them to rock, though, is at least somewhat unorthodox. “The particular songs on this record were bent toward the idea of rock music,” Chasny says on the band’s website. “I composed 30 pieces using this system. Of those 30 songs, I chose 9 that could best be worked into a rock format for Hexadic. I wanted to make a rock record.”

Even under Chasny’s pretty malleable definition of the genre though, it’s a stretch to argue that the majority of Hexadic represents anything approximating rock. The record might weigh heavy with an abundance of densely distorted, feedback-drenched guitar but most of it is distinctly light on recognisable melody, structure and vocals. Notions like verses and choruses don’t seem to apply here and, with the exception of the pummelling “Maximum Hexadic” consistent rhythm is all but eschewed in favour of a series of percussive non-sequiturs throughout each track (supplied by Comets on Fire bandmate Noel von Harmonson).

In fact, the irony is that in the main, Hexadic works best when Chasny dials down the guitar squall and channels his energies towards more nuanced fare. For instance, the slow-burn, chiming dissonance of “Vestige” makes for an excellent mood piece and sounds like it belongs on the soundtrack to a psychological sci-fi drama in space. “Hesitant Grand Light” and “Future Verbs” both see Chasny return to finger-picked guitar and represent a darker-hued take on the pastoral Americana of 2010’s Asleep on the Floodplain.

The exception to all of this is “Wax Chance.” Released as a single of sorts a short while ago, Chasny joked that it was his “pop song.” It isn’t of course – far, far from it – but with its garbled vocals, languid drumming and endless, serrated-edge guitar solo, “Wax Chance” is perhaps the closest Chasny gets to balancing the dispassionate avant-garde intellectualism of his new compositional system with the structure and careening energy of rock. It’s brilliant. A few more songs like this and Hexadic might have been an album that was as easy to enjoy as it is to appreciate.