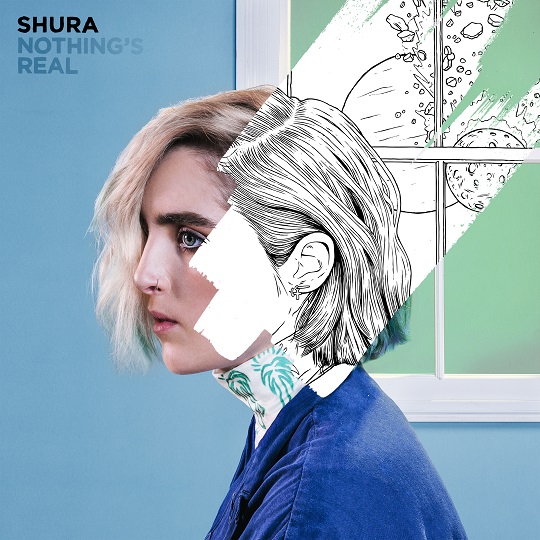 Ever since Shura introduced herself with the majestic “Touch” there’s been an insatiable clamour for her album, which seemed to amuse and bemuse her. As well as teasing #hasshurafinishedheralbumyet? on Twitter she created a website devoted to the subject. Nothing’s Real is finally here, and it’s an incredible collection of songs that are in love with perfect pop

Perfect pop has been a holy grail in music since the 80s. Not only did that decade witness a renaissance in the pop song as an art form, albums like Purple Rain and Like A Virgin sounded like greatest hits compilations, where the relentless catchiness of the music was coupled with lyrics that told stories of the everyday, of love and loss and growing up.

With Nothing’s Real, Shura has pulled off a similar feat. When she interviewed Tegan and Sara for Best Fit, she said she struggles with the concept of the perfect pop song, but the evidence of her debut points to the contrary, barring two lovely instrumental interludes, song after song is a masterclass in how to write a pop song. Shura’s not alone in carrying the pop torch - artists like Dua Lipa and Natali Felicia are also writing similarly dazzlingly pop music - but she’s the first of the new breed of pop purists out of the traps with a finished album.

Much has been written about Shura’s love of Madonna and, while she makes a few nods to her in the music, Nothing’s Real isn’t a homage to Ms Ciccone. Shura sounds like Shura, a pop fan who wrote the bulk of the album in her bedroom. Madonna was an extrovert; take a song like “Into The Groove” with its command “Boy, you’ve got to prove your love to me”, she was all about taking control of the situation. Madonna never sounded heartbroken, yet Shura, aka Aleksandra Denton, is an introvert lyrically. Uncertainty and unrequited love are all over Nothing’s Real, you just have to scan the song titles “2Shy”, “Indecision” and “Tongue Tied” to understand where her narrative is coming from.

The atmospheric, instrumental opener “(i)” eases the record into a pop collection that starts with the title track's sure-footed confidence. With a synth bassline that possesses the snapping funk (and indeed doffs its hat) to Kylie’s “Can’t Get You Out Of My Head” the mixture of singing and spoken vocal, washed with glorious strings takes the breath away with its scope and ambition.

It moves into “What’s It Gonna Be?” which is such gloriously sunny pop you can’t help but smile at its swagger. Even though the title is the most direct question on the record, it’s caveated with the humility of the line “if you let me down, let me down slow.” The opening triptych is completed with “Touch”, which is fast approaching 27 million YouTube views, a wonderful addition to the ‘we’ve broken up, shall we make up?’ songs in pops' cannon.

However sad the words are, the music is so exhilarating that the record never drifts into maudlin territory and there are moments of playfulness too. The second instrumental “(ii)”, has a recording of Shura and her twin brother Nick when they were children talking to their dad about how they feel about each other, which is both touching and hilarious.

Shura: “Not very much…

Throughout the record the universality of the words transcends age, as the best pop music should do. “What Happened To Us” is a perfect example, dealing with the aftermath of a break up, “You were somebody to me once, but now you’re a fiction, someone that I made up… I’m no child, but I don’t feel grown up”. It’s gloriously catchy, life affirming pop music with a Johnny Marr-sounding guitar refrain. On an album full of hits, it’s the song that sounds like it could be her chart breakthrough. The closing "White Light" is sensational, an extended pop bliss out that takes Low Life era New Order into 2016 with its heady mix of taut guitars, synths and Shura's assured pop nous.

Nothing’s Real is a celebration of the beauty of pop music. Its mission statement is that pop isn’t a dirty word, that at its best it’s relatable, danceable, cathartic and infectious. As with the best pop albums, it sounds like a greatest hits record. The songs flow into each other seamlessly as well as standing on their two own feet, which is an astonishing achievement. #shurahassmashedit