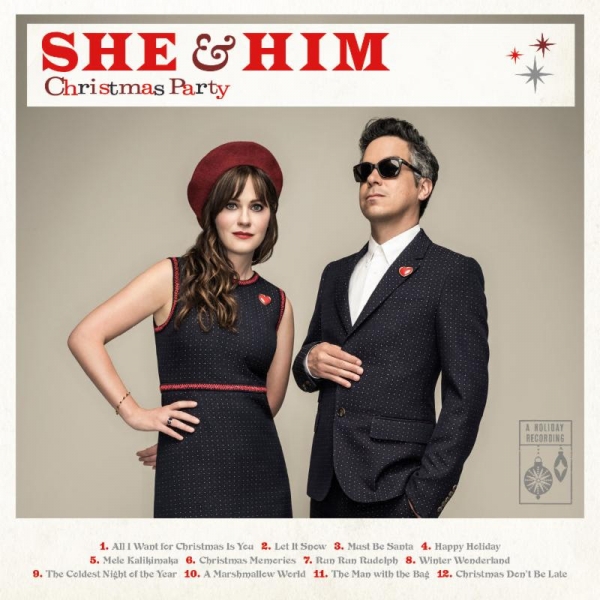 Whatever you think of She & Him, they’re probably impervious to it by now.

They’re never going to reinvent the wheel, but they’ve never professed a desire to do so, either. M. Ward, for a start, is a dyed-in-the-wool musical nostalgist, and when this reviewer spoke with him back in April about his latest solo record, the sorely-underrated More Rain, he spoke in genuinely moving terms of the escapism that his favourite 60s pop songs granted him - about how the AM radio classics of his youth were the obvious port of call once he’d finished reading the New York Times every morning.

Zooey Deschanel, meanwhile, has made a career out of the manic pixie dream girl persona that so irritates her detractors, and as much as the twee nature of that has often seeped into her songwriting - “Brand New Shoes”, from Volume Two, is a syrupy case in point - that shouldn’t take away from the fact that both her voice and the arrangements of the original material she produces for She & Him tap smartly into the old-fashioned pop aesthetic that she’s shooting for. As The Guardian sagely noted in their review of the pair’s last Christmas LP, fans of Dimmu Borgir need not apply, but that doesn’t mean that She & Him aren’t skilled resurrectors of the age of the transistor radio, even if you do think their sweetness can border on the sickly.

That’s precisely why A Very She & Him Christmas, released five years ago now, came as a little bit of a disappointment. Ward and Deschanel share an apparently encyclopedic knowledge of classic pop and that, translated to the Christmas canon and furnished with bare-bones instrumentation, should’ve made for a fine covers record. In the event, it didn’t quite come off. The vocals were oddly lifeless, especially on a weirdly-rushed take on “Baby, It’s Cold Outside” - not a patch on Deschanel’s 2003 version for the Elf soundtrack. On "Sleigh Ride" and "Rockin’ Around the Christmas Tree", she sounded bored stiff, and Ward’s usual virtuosity with the guitar couldn’t make up for it, given that these are not songs that lend themselves generously to extended solos.

Something that’s worth pointing out about the album, though, is that across its twelve tracks, it cast the net further than just the usual festive favourites. The highlights came when they took on the likes of, say, Brian Wilson’s “Christmas Day” or, even more niche, “Christmas Wish” by The Spampinato Brothers, on which Ward handled lead vocals. The songs that naturally fit the She & Him template the best were the ones that made the record feel like a worthwhile exercise; “The Christmas Waltz”, originally penned for Frank Sinatra in the fifties, was another standout, for instance.

A change in approach was never going to be on the cards on this follow-up, then, but Christmas Party does boast a track listing that’s markedly more diverse than that of its predecessor. On the classics front, we get “Let It Snow”, on which Deschanel falls foul of her tendency to veer too close to lounge singer territory, and “Winter Wonderland” - pleasant, but a touch slight. The album’s opener, meanwhile, is a cover of Mariah Carey’s “All I Want for Christmas Is You”, which we might as well grant exemption from judgement on account of how difficult it is to polish a turd.

Happily, the good outweighs the bad by quite a margin on Christmas Party. Vashti Bunyan’s “The Coldest Night of the Year”, less than a decade old, is considerably fresher than She & Him’s usual preserve, but their duet on it here is delivered with delicacy and poise. The other side of the coin sees further expeditions to the fifties, if not earlier - a catchy and quickfire “A Marshmallow World” proves a nice idea, and the decision to take on “Mele Kalikimaka” even more so, with Ward’s queasy guitar smartly evoking the Hawaiian spirit of the original.

Perhaps the real highlights, though, are provided by the slower cuts; gorgeous renditions of Sinatra’s “Christmas Memories” and, of all things, The Chipmunks’ “Christmas Don’t Be Late” are hardly groundbreaking, but they are lovely and - most of all - gentle. That’s an increasingly scarce commodity at this time of year, when the default setting seems to be shouting; Carey hollering at you one minute, Noddy Holder screaming down your ear the next, John Lennon’s nauseating hypocrisy somewhere in between. If ever there was a time for a really pretty, easy-going collection of golden age pop covers, Christmas is it. She & Him don’t quite oblige, but they get much closer than the last time they tried - a third bite at the cherry would be quite alright by me.