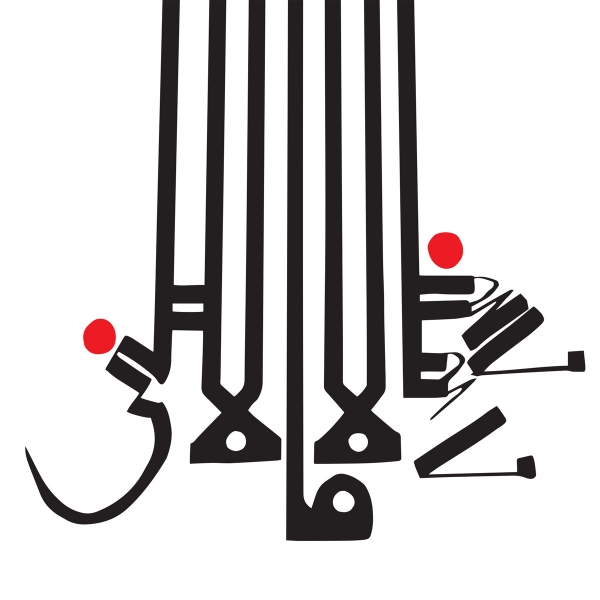 Who are Shabazz Palaces? How long have they been on earth exactly? You might have first recognised the high-pitched voice of Ishmael Butler on their debut album Black Up, as ‘Butterfly’ from the early 90’s rap outfit, Digable Planets. But even then, the true identity of these nomadic sorcerers remained somewhat ambiguous.

Like their music, Shabazz Palaces are a thing of ancient myth. After two years of sustained silence and relative obscurity the duo that purports to hail from Seattle have resurfaced again. It’s clear, that in late summer of 2011, sometime after the release of Black Up, Shabazz Palaces parted with the terrestrial underworld and ascended on apilgrimage throughout the celestial universe. They’ve returned now,yielding sonic offerings from deep space: Lese Majesty.

In a statement published prior to the album’s release, it was stated that Lese Majesty would be a “series of recorded happenings [...] A dope hex thrown from the compartments that artificially contain us all and hindered our sublime collision”. Shabazz Palaces understand that the only way to properly comprehend our world is to escape its processes. As a matter of fact, you’ve got to be on a different plane altogether. The album’s opener, “Dawn in Luxor”, is an invitation in precisely that direction. It’s an ethereal incantation, starting as the sun throws its first shadows over the stony faces of the Pharaohs fixed by the Temple entrance. Sprinkled with shimmering, astral synth sounds, it’s the audio equivalent of an outstretched alien hand tempting you upward on a strange, cosmic odyssey: “From Luxor to heaven’s endless sprawl”.

Lese Majesty liberates us momentarily from the cave, from our “artificial compartments” (“with our chains/and our wings”). Seen from the distant vantage point of the stars, the earth doesn’t appear divided up into its component parts: international borders, ethnic groups, warring factions; your money is worthless, work is stupid and your worries are meaningless; in space, even time is unreal. All that’s objectively left of our world is a Kanye West figure, arguing incoherently with his own elongated reflection undulating in a penthouse swimming pool (I can’t help but personally imagine that Kanye’s cryptic ramblings are somehow realised in the faint auto-tune sections on the tracks “Ishmael” and “...down 155th street in the MCM snorkel”, bouncing off pointlessly into eternal space). From these interstellar heights our material world looks and sounds pretty absurd - but in a humbling way. As Butler puts it on the almost amorphous track, “The Ballad of Lt. Maj. Winnings”, maybe this really is “all a dance show”. The sporadic interludes of dialogue - most notably the Hustler’s Convention sample on the track “Foray Forerunner” - and even some of Butler’s lyrics, seem to uncontrollably infect Tendai ‘Baba’ Maraire’s glistening, magisterial production, like another world’s equivalent of erratic static interference. And the hook (if you can call it that) on track “They Came in Gold” might as well disclose the existence of a species of curious, extra-terrestrial observers, gazing down at our planet, trying to make sense of these unintelligible sound waves (“Them just walking round, just walking round/They just watching down, just watching down/What they talking bout, they talking bout?”)

On the surface, Lese Majesty doesn’t follow a conventional musical structure; this thing eschews the standardised verse-chorus formula from the off. In fact, a lot of the tracks on this record seem to expand into one another, which is ordinarily a criticism; but then, this isn’t an ordinary record. It’s certainly nothing to do with a lack of inventiveness or variety, rather, a measure of holistic, sonic consistency, with each track dissolving smoothly into its respective whole. You’re elevated into the soundscapes of the quasars, where music assumes a different purpose, texture and direction altogether. These aren’t shapes and sounds we’re used to, not in alternative hip-hop, or any other genre for that matter. Sonically, it’s not the amplified, voodoo assault on the senses that Black Up was. Rather, Lese Majesty gently disorientates you with dizzying vibrations, droning, ephemeral space sounds and abstract noise pieces (the weirdest being the utterly formless “Divine of Form”) that don’t so much blow you away, as lull you into a deep cosmic trance. It’s really quite beautiful. Comprised of seven “astral suites”, Lese Majesty feels closer to an electronic symphony movement than a conventional album. It’s also what makes it a “grower”. With eighteen tracks, you’re not likely to remember its precise sequence on the first, second or even third listen. And if you still have trouble decoding the aptly titled final track, “Sonic MythMap for the Trip Back”, then our cosmic tour guides have kindly enclosed a fold out diagram, breaking down, in cartographic terms, the precise location and relevance of each of the seven suites of Lese Majesty. (I’ve seen it, and it doesn’t make any sense).

Given that back in his Digable Planet’s days, Butler and his cohorts configured their own colourfully abstract conception of socialism - which they dubbed the ‘insect theory’ (hence the moniker, ‘Butterfly’) - there might well be room for a utopian endnote to Lese Majesty. Digable Planets were fascinated by the communal and cooperative habits of insects. It informed large parts of Reachin’ (A New Refutation of Time and Space) and conceptually, it seems not to have evaded Lese Majesty either. If you consider that looking down through a telescope from high up in the constellations, the human race might appear to come into focus like a synchronised network of busy, interconnected ant colonies, with our nests and our commuter highways, then this album might well be interpreted as a sort of cryptic manifesto – somewhat of a “beatific warcry” (to quote directly that aforementioned statement), a rallying call for us all to collectively bug out, tune in to the space hymns, and finally realise our true, universal, insect potential.

Win a copy of Lese Majesty on double gatefold vinyl