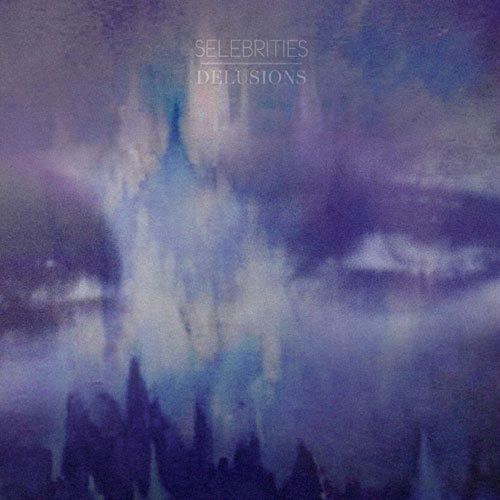 With 80s-influenced synth pop oozing from every popular music pore at present any band signing up for this genre has to come up with something pretty special to stand out. Brooklyn trio Selebrities might just have done this – with their suitably hipster-friendly looks and NYC nonchalance, but most importantly, following a couple of promising singles and extended players, a full-length album that is more than up to the task.

Having quietly slipped out their Ladies Man Effect EP last year, Delusions gathers the promising notes paraded on that four-track treat and crafts them into a time capsule of sleazy pop. The perfectly pitched three-piece channel New Order basslines and the sort of metallic guitars that resonate on Joy Division records. They are ice cool, and with Maria Usbeck’s nonplussed vocals layered over a noir, slightly italo-inspired undertone, have put together a fine showcase of all that was good about the 1980s New Wave.

Album highlight ‘Time’ is as apt as it is a great tune, opening with “Where did the time go?” and capturing the mood of a group who would not have looked out of place on Top of the Pops 25 years ago. Delusions’ title track kicks off the record and the first impression is of a dark and lingering affair of the mind, channelled by Usbeck who does a fine female impression of Ian Curtis, supported by appropriately sinister guitar chords. ‘Living Dead’ does nothing to lighten the mood with the sort of brooding bass, frenetic guitars and snappy drums touted more recently by Canadian ‘couldabeens’ The Organ. Similarly the opening bars of ‘Into The Night’ could be Katie Sketch resurrected and – although Usbeck is an octave higher – it’s hard not to picture The Organ’s front woman leaning against the exposed brickwork of a downtown warehouse singing Selebrities tunes.

The mood lifts as Delusions unfolds – ‘Can’t Make My Mind Up’ is more Human League than New Order and with it’s catchy synth riffs is a pure pop song, while ‘46th and Bliss’ is equally upbeat and a potential single. Likewise ‘Secret Garden’ – which appeared on Ladies Man Effect – is yet another chart-friendly tune. The only minor disappointment is that ‘Move This’ –Selebrities splendid cover of Technotronic’s 1989 dancefloor hit – did not make the cut.

There may be reams of 80s-inspired noise out there but there’s little that sounds as authentic as the ten tracks on Delusions. Selebrities have successfully bottled the whole era – guitars, synth, goth and pop – and pooled it to perfect effect.