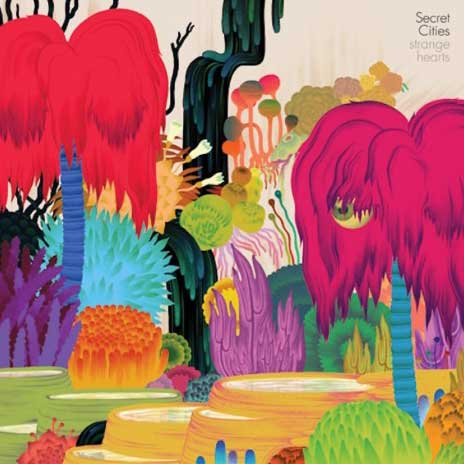 Listening to Secret Cities latest record for the first time is a like opening a long-forgotten musical box again, and again, and again. Strange Hearts is packed full of what sound like familiar melodies and choruses, all jumbled up together and coated in a fuzzy layer of fond memories.

The Midwestern melodramatists invite you to sway with their tender tones which slip lackadaisically from lo-fi calypso to crashing indie angst, as they opt for a slightly more dated sound than the one paraded on 2010 debut LP Pink Graffiti. And at first this feels like a bit of a shame. Strange Hearts is all suppressed vocals and dreamy three-minute pop songs that are analogue to the extent that they are in danger of failing to command the attention they deserve.

Those familiar with the band’s last record will know that Secret Cities have short attention spans, with songs frequently shooting off on tangents. Needless to say those irritated by the seemingly elusive direction of Pink Graffiti will be riled by trio’s consistency here – once again they have brilliantly mastered the art of avoiding the point, instrumentally. But somehow it works – this muddled pile of melodies in a swirling pool of percussion lays bare thoughts, feelings and stories in a traditional yet fascinatingly original fashion.

Album opener ‘Always Friends’ masks the sinister tones of a fallen romance behind cheery melodies and perfectly pitched crescendos, in a rather dated take on the classic break-up song. The hard-to-distinguish vocals shy away from the world, with lyrics such as “I’d felt so much better to know that it was bad for you too” suggesting that maybe Secret Cities just don’t quite have the courage to reveal the dark feelings of scorned love. It’s painfully sweet and irresistibly moving.

‘Love Crime’ is a more upbeat affair musically, with it’s jaunty chorus and what sounds like ukeleles plucking along in time with a muffled toy drum kit. The effect is that of a mini marching band trailing singer Charlie Gokey as he croons another anthem for doomed romance. And this is a recurrent theme – soft organs and fellow vocalist MJ Parker’s echoey calls blend perfectly with Gokey’s tones on ‘Pebbles’ – a beautifully wistful ballad about lost love dreams and an understated highlight on the record.

There’s a 1960s ‘sweetness and light’ to Strange Hearts, which sounds for all the world like it’s being played in the next room. There are whistles but no bells; guitars but no amps; and melodies streamed through a kaleidoscope instead of a microphone. The whole thing is charmingly innocent and unconventionally beautiful.