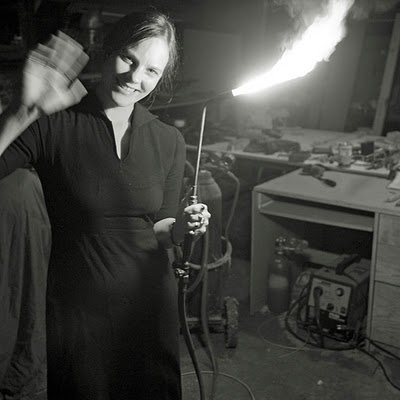 One of the hardest things about The Calcination of Scout Niblett- the singer’s first album in three years- is that it is so difficult to describe.

Yet, it is precisely this fact that makes it so good in the first place. Staffordshire-born Scout Niblett, now based in Portland, manages to merge influences so effectively that the sounds become her own, rather than a re-moulding of revered predecessors. The grungy sounds of Sonic Youth and Nirvana are evident, the guitars on Kings sounding particularly Cobain-esque, but the singer-songwriter has so firmly taken hold of the quiet-loud dynamic that her songs remain individual.

Opening track 'Just Do It!' sets the tone, quiet Shellac-style electric rumblings underlying Niblett's clear, folk-learned vocals, intriguing accent and pronunciation. The pure yet untamed feel of her voice brings to mind a more raucous Cat Power or early PJ Harvey. Lyrically, Niblett swings from brutal honesty to apparent nonsense, each as effective and complimentary to its accompaniment as the other, 'Duke of Anxiety' coming off as especially witty. The title track carries the lines "Welcome to my self-made sweat box. This is where I take it all off", highlighting the record's theme of exorcism.

'Cherry Cheek Bomb' shreds itself open with one gargantuan wave of riff, harking back to classic Smashing Pumpkins' tones (before egos got the better of everyone), then retreating again to more introspective meanderings. The simple, stripped back drums and howls of "hallelujah" are heart wrenching, illustrating the intimate, lonely feel of Niblett's music at its best. The nursery rhyme melody of 'Lucy Lucifer' is similarly haunting. Niblett's long-term collaboration with Steve Albini makes sense, his penchant for gain-centric instrumental mess music and sporadic drums placed prominently in the mix perfectly complimentary to her style. The overall feel is awfully reminiscent of his and Harvey's Rid Of Me, each space purposefully utilised to counterpoint fuzz-driven chords and guttural vocal lines.

Whilst Niblett's fifth album is unlikely to result in any kind of mainstream crossover, the typically unstructured nature of the songs perhaps unapproachable to some, Calcination is incredibly visceral and gripping. There always remains a powerful, otherworldly quality which the listener can't quite put their finger on. Admittedly keeping carefully close to the minimalist sounds she has been making for a decade, it is a format Niblett has now distilled into an art form, wasting never a searing note or unsettling fill. Tense, raw and skeletal with a soul, Niblett has perfected her ability to nip delicate emptiness in the bud with delightfully harsh soundscapes and acerbic lyrics and, for that, let us be thankful.