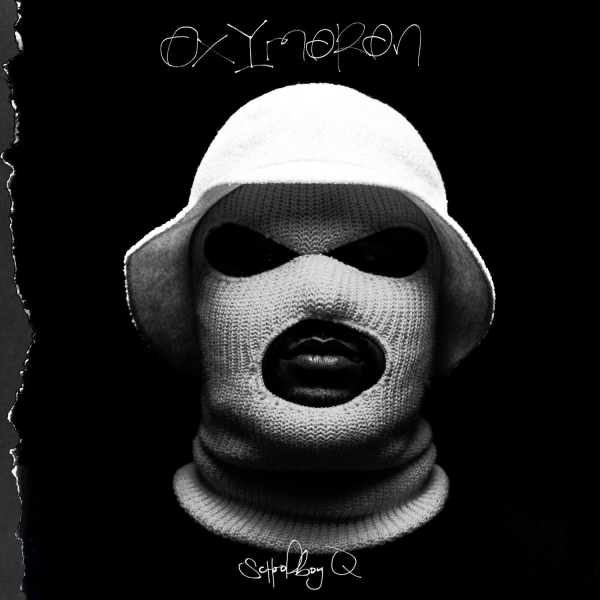 ScHoolboy Q’s been a little overshadowed by his Black Hippy crewmate and all-round rap wunderkind Kendrick Lamar – which is a shame, because Q’s arguably a far more interesting figure. Kendrick has a po-faced earnestness, not to mention a cringeworthy habit of explaining his own metaphors to the unenlightened listener; meanwhile Q’s a master ironist, a free-spinning wrecking ball of self-assurance. “Metaphor,” he yelps gleefully on 2012’s “There He Go”. “How I come up with it? I don’t fuckin’ know.” On Oxymoron, though, his playful irony’s hardened into a bleak sardonic nihilism; while he still performs all his usual bouncing vocal acrobatics his voice is cold and harsh over thudding boom-bap instrumentals, the half-sung vocal hooks that litter the album sounding less like a rousing singalong than a bitter, mocking laugh.

ScHoolboy Q’s a Los Angeles rapper, and Oxymoron is full of a certain LA sensibility. It’s not Compton soap-opera drama (although that’s certainly present) or a lazy Venice Beach kush haze (that too) or even the stylised neon-lit violence of films like Drive, but a pervasive precariousness. This is a city sandwiched between a thousand miles of burning desert and a thousand miles of empty ocean, a place that could be wiped out at any moment by earthquakes or tsunamis and where movie studios are constantly producing spectacular images of mass destruction. There’s an apocalyptic undercurrent to Oxymoron: a recurring image of Q in 2010, hustling under harsh blue skies, utterly convinced that the world is about to end with the Mayan calendar, and almost looking forward to it – after all, it’s one way to get out of the game. Lines like “I don’t mind if the world stops” end up infiltrating party anthems like “Hell of a Night”. No such luck. “2012 ain’t really happen,” he complains elsewhere, “so I guess it’s back to trapping/ eyes open night to morning.”

Rap is full of drug-peddling anecdotes, but as Q makes clear in the standout two-part track “Prescription/Oxymoron”, he long ago gave up slinging crack to sell synthetic opiates. Crack might still have a certain glamour (witness Pusha T castigating other rappers for making their money from music rather than rock), but the prescription drug game remains defiantly uncool. It’s in this kind of contradictory grey area that Q’s in his element, flipping the conventions of hustler rap into a sordidly compelling narrative. He sells OxyContin and then gets addicted himself, falling dangerously in love with synthetic heroin, “without the injections, same love and affection, how could they say feeling good is an addiction?” There’s more grim deconstruction in “Hoover Street”, which starts with cascading drums and dizzy echoing vocals before breaking out into bouncingly menacing electronics and the story of Q’s decision to get into the drug game: “Since a young nigga I admired the crack sellers, seen my uncle steal from his mother, now that’s the money that I’m talking bout.” No innocence: elsewhere we hear how Q’s grandmother showed him his first gun, but this apocalyptic disintegration is there from the first seconds of the album. The cute voice of his young daughter Joy: “Hello? Hello? Fuck rap. My daddy a gangsta.”

Along the way there are some seriously excellent tracks, from the dancehall-inflected sub-bass stomp of lead single “Collard Greens” (which also features Kendrick Lamar rapping sexual come-ons in Spanish with his gloriously weird robot-voice) to the juxtaposition of the quintessentially Californian production on “Blind Threats” with Raekwon’s delivery, as New York as lox and cream cheese, to the eschatological cacophony of closer “Fuck LA”. The best track on the album might be “His And Her Fiend”, a woozy, weird combination of jangling offbeat drums, mournful pitch-shifted vocals oozing with Screw juice, and SZA’s dreamy, soulful singing. At the same time there are still a few missteps. Oxymoron continues the perplexing habit hip-hop at large has developed of offering guest spots to 2 Chainz, despite all his verses being utterly and instantly forgettable. The collaboration with Tyler, The Creator on “The Purge” is more interesting, but Q’s frantic singsong delivery doesn’t work nearly so well when it has to work around Tyler’s fractured production. “Hell of a Night” is a perfectly acceptable trap banger, full of richly throbbing bass and slick hi-hat rolls, but it’s a sadly formulaic break from the more compelling stuff elsewhere. Meanwhile “Grooveline Pt. 2” is an attempt to combine laidback loverboy rap vibes with pimp braggadocio whose chorus line (‘will you sell that pussy for me’) ends up sounding less smooth than queasily gynaecological.

Of course, it’s natural that an album called Oxymoron should have its discrepancies. For its occasional low ebbs, Oxymoron is an impressive display of bleak wit: ScHoolboy Q pits image against reality and myth against misery, trying to make a space for himself among the densely tangled contradictions of existence. The ironic gap opened up by this procedure (what Hegel calls the negation of the negation) isn’t always a particularly pleasant place, but it does make for a fascinating record.