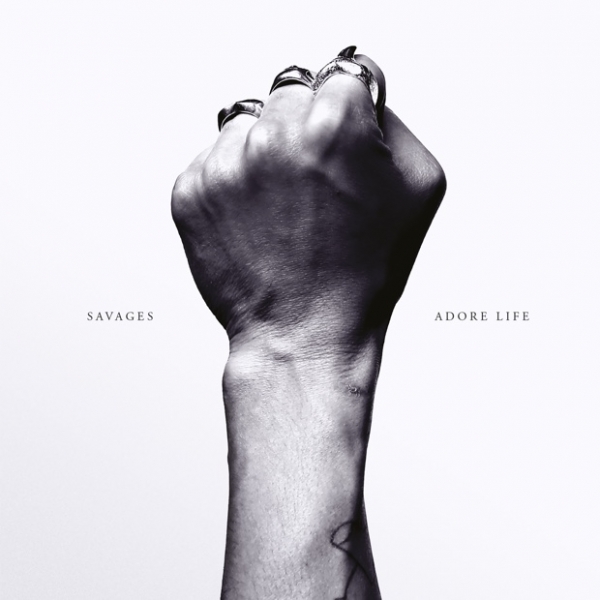 Post-punk rarely comes across as an embrace as well as an open call to arms. But on Savages’ second record, Adore Life, the ten urgent, taut new songs are equally determined to snap us out of our revelry, while also challenging listeners to find love where we can and make the world a better place in the process.

While 2013’s Silence Yourself was filled with untamed, strident anthems of assertion and incisiveness, the new record is far more seductive in both its convictions and its potency. The intimate lure of connection lingers fitfully beneath the churning pulse of these dynamic new tracks, which shake you awake as well as whisper in your ear. “Is it human to adore life?” questions singer Jehnny Beth on the record’s sprawling emotional centerpiece, “Adore.” By the end of the record, Savages have left little doubt that love is indeed the answer, and that they are unquestionably the best rock band in the world at the moment.

Throughout Adore Life, the quartet seem intent on breaking free of the nagging conventional confines of the studio. Their sound and their message is bigger than four mere walls can contain, and the songs take on the raw, expansive quality of a live set that frequently hits full boil. The group – featuring Beth, guitarist Gemma Thompson, bassist Ayse Hassan, and drummer Fay Milton – decamped to New York City last January to run through and refine their new material during a series of nine riotous club shows. And that transformative experience helped the group sharpen these songs into the ten venomous arrows that they have collectively aimed at your heart as well as your head. Just don’t flinch or the prick could prove to be lethal.

Amidst the squall of Thompson’s guitar on the fiery lead-off track, “The Answer,” Beth wails, “If you don’t love me, don’t love anybody.” The song raucously captures the pleasure and pain of relationships, both lyrically and musically, as the towering number burns brilliantly before crashing out spectacularly upon the craggy rocks amidst a Sirens call to shipwreck. Hassan’s swinging bassline illuminates the dynamic “Evil,” while the ominous lyrics suggest a brave protagonist who fights against being confined by expectations or those unwilling to accept their evolution.

“Love is disease, the strongest addiction I know,” exhorts Beth during “Sad Person.” That tempestuous struggle between passion being viewed as either a cure or a cancer, a demon or an angel, courses throughout the entire record, as each number exposes our collective vulnerability while we reflexively wince at remembering past heartbreaks. Adore Life emphatically suggests that even our moments of misery contain more exhilaration than being dead bored, and risk is always more rewarding than cowering in fear.

The record also takes on an added, experimental texture that builds on the raw fury of their earlier work. The slow, moody bass of “Slowing Down the World” echoes Fugazi’s finest moments, while the fuzzed-out throb of “Surrender” blossoms into a Sonic Youth-like wall of sound, and the ruminative closer “Mechanics” finishes the album with an eerie, cinematic tension that lays bare that the tricks of love are still to be learned, and will stand the test of time.

But Savages are still at their best when they hit you with the menacing turbulence of “T.I.W.Y.G.” as they offer up their emphatic warning of what awaits you when you disregard their musical mission and dare mess with love. Adore Life is a defiant, audacious statement by a band who is interested – and invested – in making genuine emotional connections in a modern world that is rapidly retreating towards devices that form pale, artificial substitutes for real human interaction. There aren’t any synthetic contrivances to be found on this focused, intensely revealing record, for there are far too many of those glitzy baubles around us at all times. Look elsewhere if mere entertainment is what you're after here. For Savages have presented us with a communal challenge disguised as a rock album, while also drawing a clear line in the societal sand. Open yourself up to life and to love, come along with them and don’t look back – for the world is a far better place when it’s filled with passion such as this.