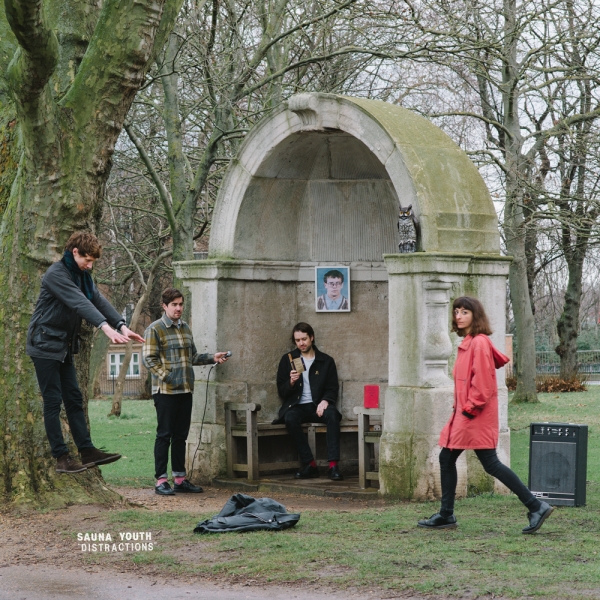 The word “collective” can be a tricky term. When it comes down to it, the meeting of musical minds and trading of ideas can often lead to friction, break ups, and even the occasional punch up. But in the case of London based four-piece Sauna Youth, the concept seems to be a fitting one, and it’s clear the various participants are far from launching into a round of fisticuffs.

Sauna Youth (their deliberately young-in-cheek moniker aside) obviously pride themselves in shifting the norms of what it means to be in a band. The members, all of which spend large chunks of their time in various other musical projects, have also formed an outfit called Monotony, a band that consists of exactly the same members of Sauna Youth, only playing different instruments and offering up their take on dirge rock. Listening to the bands side by side, it’s hard to tell where one ends and the other begins, but that’s kind of the point.

So, with this in mind, you’d expect Sauna Youth’s second album Distractions to be more than a little ‘Meta’. And you’d be right. In fact listening to Distractions is a bit like the musical equivalent of standing in the middle of a hall of mirrors.

Opener “End Loop” provides 18 seconds of dissonant atonal chimes, lulling you into a false sense of security before “Transmitters” thumps into life with a round of skin splitting toms and abrasively spiky riffs. The shout-along vocals, lilting with a well placed cockney slur, give Sauna Youth the air of a band who wouldn’t have been out of place on a late 80s Stiff Records compilation.

“Monotony”, presumably a reference to the other version of the band, is as self referential as it gets with a ten tonne, rasping guitar line that stays on the same chord for nearly the entire song. But despite being a knowing embodiment of itself, the track is far from boring. The song sees Sauna Youth hypnotically drawing you into their head banging lit-punk microcosm, and it’s place you’ll want to imerse yourself in for a while. But given the fact that the tracks on Distractions seldom pass the three minute mark, it’s only ever going to be a short, sharp shock.

“Paul”, the first of the spoken word tracks on the album, serves as a loose intro to “Abstract Notions”, the final line of the former emerging as the back bone to the lyrics of the latter. Stylistically, it would be hard to conceive of two track less alike, a murky pool of low end feedback giving way to a hyperactive, jagged wall of no-wave rock. But the juxtaposition works and serves to emphasise the explosive catchiness “Abstract Notions” has at its heart.

Sauna Youth’s relentless high energy approach comes to fruition in “Try To Leave”, telling a tale of urban discontentment against a scrappy melodic onslaught that comes across like the snotty teenage lovechild of Buzzcocks and Thee Oh Sees.

With Distractions, Sauna Youth showcase their ability to infuse a classic punk aesthetic with skilful artistry. Of course, they’re not the first band to do this, but there’s plenty of depth to the songs and Sauna Youth more than deserve to take their place among the current cerebral punk rock flag bearers.