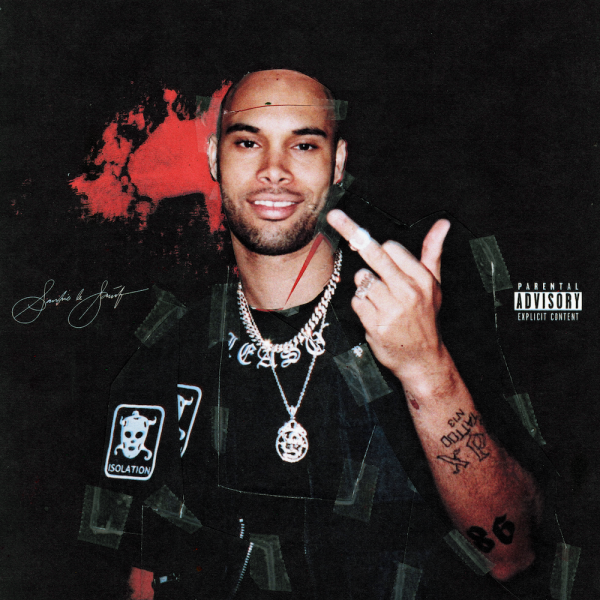 Santino Le Saint’s debut album Beautiful Disaster finds him entering a new chapter in his musical journey. No longer grappling with the choice between the Blue Pill or the Red Pill (his twin pandemic EPs) he’s instead delivering 12 tracks intensely flavoured with his blend of rock, R&B and hip-hop production. Enlisting the help of Thomas and Benjamin Totten to raise the bar of his signature guitar work and producer Elevated (Giggs, Central Cee, Fredo) this project breaks new ground for the Brixton vocalist.

Beautiful Disaster is as much a story of doomed lovers as it is a journey of Le Saint’s own self-discovery. If something feels so good but comes at a cost, is it worth the risk? The album opens with the self-fulfilling “Best Day Of My Life” which then leads into subsequent tracks navigating the induced highs and crushing lows of a lifestyle of drugs, booze and entanglements, raising the age-old saying of the higher they climb, the harder they fall.

As the protagonist on this journey of self-destruction and introspection, Le Saint cycles through nights of excess and days of recovery. On “One More Night” he asks himself “How many more shots I'ma take? / How many more lines can I rake? / How many more flights I'ma catch this week? / How many more hearts can I break? / How many more nights we sleepless?”. The message is dark, it’s a stark reminder that however we romanticise someone else’s life, there’s always pain beneath the surface. With the weight of his sins on his shoulders, Le Saint executes a seamless concept album with little place to hide his scars. There aren’t enough tracks to allow the listener to switch off and each is perched sonically on a knife’s edge of genre, showcasing the rock star lifestyle of ‘live fast, die young’.

Beautiful Disaster is equal parts depressing and uplifting in its philosophy, it’s a rollercoaster of emotions that brings us right to the end of a precipice but at the halfway mark eases us into smoother more heartfelt tunes like “Toxic” and “Hurricane”, the latter which was recorded with the least production aptly during a powercut and sees Le Saint’s rawest vocals to date. It’s clear that Le Saint could have left the matrix at the point of choosing which pill to take but instead he’s manufactured a utopia that suits him best, where anarchy and attraction can coexist.

Having stubbed out the last remnants of his romantic flames, the final track “Love, Drugs, Anarchy” wrenches us back to the place Santino Le Saint sits most comfortably, on the throne of the Prince of the Damned.