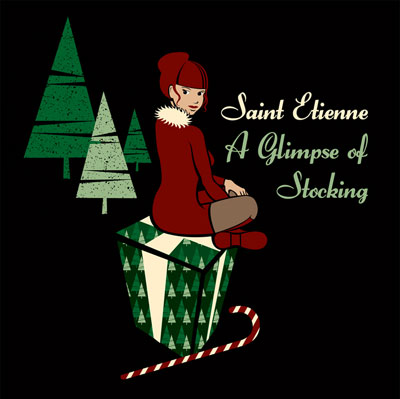 Saint Etienne are indie dance’s answer to Dame Judi Dench. They’re a self-consciously British institution; they’re charming, they’re talented, and they’re difficult to dislike. Their songs have roots in quintessentially British sounds and places, like the pop music of the swinging sixties and the slightly awkward dance music which developed out of acid house. They exude an unusual niceness; this is a band you could go for a pint with, or hang around with at a gig. This sense of niceness is only reinforced by their steady stream of fan club only releases, of which A Glimpse Of Stocking is the latest example, and by the special editions of the record, which come with a Christmas card signed by the band and, in some cases, an extra track written just for you. Okay, so this niceness comes at a price – £150 in the latter case – but as ever at this time of year, it’s the thought that counts.

A Glimpse Of Stocking collects eight previously released songs, many of which fans will be familiar with from previous fan club releases, and seven new compositions, all of them Christmas themed. It transpires that the band are unafraid to revel in the cheesier side of Christmas: several songs are cover versions of positively painful seasonal tracks by the likes of Cliff Richard, Chris Rea and Claudine Longet. Thankfully, they manage to improve all of these. Their version of Rea’s ‘Driving Home For Christmas’ is especially impressive; the forgettable original is softened, prettified, and turned into something genuinely touching, Sarah Cracknell’s delicate voice accompanied only by an acoustic guitar and (in a winningly ridiculous move) the occasional car-based sound effect.

While the cover versions are worth a listen, the album’s main draw will presumably be the new and exclusive original material. These songs are a mixed bag, both stylistically and in terms of quality. The dramatic, driving ‘No Cure For A Common Christmas’ is further evidence of the group’s talent for crafting lovelorn dance music; of all the songs compiled here, it’s the one you’re most likely to listen to in mid-July. Some of the other tracks aren’t as memorable, and the regrettable euro-dance folly ‘Have a Party’, a mess of eighties synth sounds and faux-naive lyrics,  is memorable for the wrong reasons; it’s the one moment when the band push the festive cheesiness to far, the musical equivalent of a cheery but awful Christmas card. On balance though, the exclusive songs are good enough to make the purchase worthwhile if you’re a long-standing fan, especially given that the trio currently seem more interested in releasing expanded editions of old albums than recording a proper follow-up to Tales From Turnpike House.

The band’s Dame Judi-ness, their niceness and consistency, has an unfortunate flip-side: their music can sometimes sound a little too inoffensive and undemanding. Luckily, a degree of inoffensiveness is acceptable on a Christmas record, and thirty minute noise experiments aren’t an especially appropriate soundtrack to seasonal parties. So, in a sense, this is a great way to experience Saint Etienne for the first time: you can enjoy their pop nous and ignore their weaknesses. Older fans will find some of the new material entertaining; recent converts should consider signing up to that mailing list.