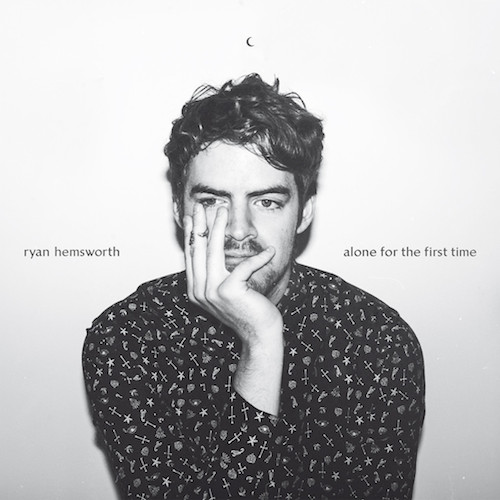 Last year saw the release of Ryan Hemsworth’s Guilt Trips. It was a well-received second album, on which the sample-fond alchemist from Halifax offloaded a heady bout of screwed’n’chewed electronic pop with dance, hip-hop and experimental tendrils. He’s now following that up, speedily, with Alone For The First Time, a 27-minute, seven-track mini-LP.

The implications of the moniker Alone For The First Time suggest that this'll be a guestless affair, when in fact all but two of the seven tracks feature outside interference (totally in a good way). The record sees Lontalius, Dawn Golden, DOSS, Kotomi, The GTW, little cloud and Alex G, who's set to drop his own record, DSU, next week (10 November).

The title's not referring to the amount of bodies involved however, instead summising the emotional substance on the record. It is an intimate, introspective dogpile; it's unrelenting in its tidal waves of aortic prods – just when you thought you were done sniffling, Hemsworth and pals will pull you back in. It's not exactly a bawl-a-minute weepie, but they'll sock you right in the feels without remorse. Hemsworth said before the record's release that it was essentially an antithesis the point he'd got in life – hopping between lonely hotel rooms and transitory isolation as an in-demand DJ schlepping it across the States. It's his attempt to “get out of these clubs and find something different... [it's] a hiatus from necessary evils.”

Featuring Alex G, “Too Long” sparkles with tropical tranquillity in the synths and a clarity from G that's almost unheard of. It jerks between the relative piña colada-y chillax flavours with a lunging, hyper-violent explosion of blood-red compulsion. “Surrounded”, seeing the input of Kotomi & DOSS, is a '90s rave ditty. Smothered with techno ambience and '90s trance-rave fragments, the pace is highly-charged, for the most part, which is a contrast to much of the album.

“Snow In Newark” – featuring Dawn Golden (no relation to a woman named Dawn, nor the far-right Greek organisation) – probably represents this best. A voyage of self-discovery and unrequited love, Golden croons with power: “and I don't wanna leave you here, I just wanna be your shadow...” the chorus starts with that stomach-in-your-throat kind of breathlessness. It's a starry-skied paean, sodden with twinkling synths and Hemsworth's hip-hop beats. He's longing for the human connection he's deprived of more often than not, and that's a hugely human truth that the bravado-riddled world of superstar DJs often shuns; can you imagine Diplo or David Guetta telling the world they just needed a cuddle?

Obviously Hemsworth isn't really that kind of DJ/producer anyway, but the sentiment is the same. He's stepping outside his comfort zone to look inwards and examine the colandered contents of his psyche. In this sense, Alone For The First Time is an emotionally ambitious record. Musically it's different for Hemworth, but given his propensity for erratic, Frankensteinian experiments with pop samples and dance beats, this new LP doesn't really break new ground in the same way. It does flesh out his personality and provide substance behind the flashy pop showmanship though, and that's not something to be undervalued.