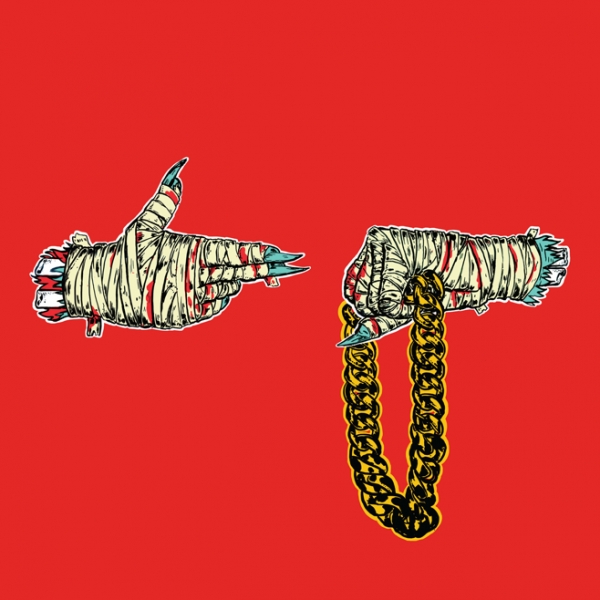 Run The Jewels 2 starts as it means to go on, and I don’t just mean Killer Mike’s motivational speech that signals the start of “Jeopardy”. I’m talking the deep bass, blaring percussion and wired guitar that underpins Mike’s flaming verses and El-P’s conversational rhymes on that opening track….what RTJ2 lacks in sheer brutality, it makes up in the depth and avant-complexity that peppered El-P’s time with Company Flow and Def Jux. Run The Jewels are back, and they’re better than before.

When Mike Render and Jaime Meline first teamed up on Killer Mike’s R.A.P. Music, we found the pair mixing Mike’s “hardcore G shit” dirty south style with El-P’s eccentric east coast production ethics for one of the most streamlined rap records in recent memory. Run The Jewels brilliantly continued the collaboration, with Mike and El-P trading off incendiary and improvised verses for an act that didn’t feel like it had much of a shelf life but would prove damn hot for any one-off shows and festival appearances. But here they are again, back for more and they’ve constructed their very own M.O. which will enable them to continue Run The Jewels for as long as they like.

Or run out of targets, at any rate; because what defines RTJ2 is that no-one is clear of danger. Politicians, both liberal and conservative, the police, the prison system, those who can’t back up their big mouths with the requisite flow...the list is endless. Only the album guests are safe: Rage Against the Machine’s Zack de la Rocha, Travis Barker, Diane Coffee, the filthy-mouthed Gangsta Boo...they all contribute to the depth of RTJ2 but never outshine the stars of Render and Meline, despite all giving the best performances of their careers in some time.

Once Killer Mike psyches himself up Taxi Driver-style (“this muthafucker put a mirror on the goddamed screen!) “Jeopardy” is all deep-down beats and in-your-face braggadocio as Mike calls out the haters (“So fuck you fuckboys forever/I hope I said it politely/and that’s about the psyche of Jaime and Mikey/you meet another pair better, highly unlikely”) and El-P subverts the self-confidence by first saying he’s “on the radar a little blip in the shadow of motherships” before he blasts back, surrounded by a wall of percussion louder and better than anything he’s produced before, with “Run The Jewels is the answer, your question is ‘what’s poppin’?’ This is take-no-prisoners shit; Jaime and Mike are here to give you the questions and the answers.

The darkness comes soon enough, but the first half of RTJ2 is just as hard hitting as the first record; “Oh My Darling Don’t Cry” takes El-P’s futuristic 808s and melds them to Southern beats but it’s he, rather than Mike, who sounds completely on fire here, giving props to Notorious B.I.G. and foretelling “Blockbuster Night, Pt1”’s fiery alliteration with yet another quotable line or two before the ballistic beats of the latter continue the alliteration with some of the best trading of verses these two have ever undertaken:

Mike: “oodles and oodles, bang bullets at sucka’s noodles..”
El-P: “I deal in dirty work, do the deed and then dash, ditch ‘em”

Not the most striking of lines, but the rhythm and cadence is simply breathtaking.

While that track is a fuck you to every single person and thing going, it’s the prison and court system that take a hit on the subterranean explosions of “Close Your Eyes (and Count to Fuck)”, Killer Mike going in hard on how broken it is, calling on inmates to riot while Zack De La Rocha’s brilliant verse (the best thing he’s done in, oooh, twenty years?) makes the link between death, prison and unemployment as stark as it can possibly get.

The album can’t continue at the relentless pace it starts with, so when we hit the dubbed-out “All My Life”, it’s a welcome slowing of the pace musically but not lyrically, with Mike – never slow to pull his political punches as everyone from Reagan to Obama found to their cost on R.A.P. Music – foreshadowing Ferguson and Michael Brown before going in hard on Donald Sterling on “Lie, Cheat, Steal”. It bears repeating, but no-one is safe.

If Mike’s the star of the first half of RTJ2 then it’s El-P who gets the chance to shine on the second; we all know he’s an underrated rapper but it’s incredible how his production skills seem to get better and better. The combination of his and Boots’ slick and futuristic beats on “Early” is quite something, becoming almost gospel by the end, while “All Due Respect” takes Travis Barker’s drumming and twists it into free-jazz space rock, throwing the percussion all around Mike’s lyrics and that ever-present twisted bass. Gangsta Boo’s appearance on “Love Again” signals El-P’s sleaziest beats to date while all three MCs attempt to outdo each other on the explicitness of the rhymes. As the psychedelic madness of “Crown” (which calls to mind Cannibal Ox) gives way to the simple assault of “Angel Duster” we’ve gone full circle, Mike back again, his voice acting as a percussive element itself takes one last shot at everyone going, including himself.

This is the best relationship in rap music right now; more than producer/rapper, Render and Meline truly are brothers in arms and they’re here to give us all the push we need to take on the world. There’s a line in “Crown” that says it all: “you are not you, you are us now” – from giving us two records for free, for being two of the most open and approachable men in the business to two of the best artists the genre could hope for, Run The Jewels have taken on hip hop and fucking won. Period.