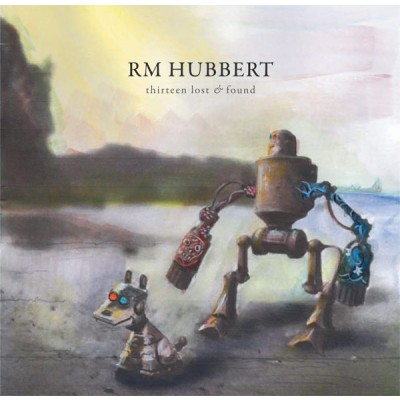 RM Hubbert was once a member of Glasgow post-rockers El Hombre Trajeado, a band formed back in 1995 and a mainstay of a wonderful scene at that time in Glasgow that included Mogwai, Ganger and The Delgados to name but three.

I had just started university in the city and the depth and variety of music was incredible, I felt privileged to be immersed in something so new and exciting. El Hombre’s music was restless and inventive, edgy and funky, but they never quite got a hold of the record-buying public’s imagination and despite support slots for Nick Cave and Tortoise, the band spluttered to a halt some ten years later. A technically stunning guitarist, Hubbert took a break and returned to live gigging in 2008 before releasing his debut solo record First and Last. A stylistic change from his work in El Hombre, Hubbert’s work now takes its cues from flamenco and samba, his intricate playing suiting this genre well, often backed simply with basic percussion. First and Last, whilst dealing in loss and death, was a beautiful triumph, resulting in his signing to Chemikal Underground and releasing this collaborative new album Thirteen Lost and Found. A record made with musical friends such as Aidan Moffat, Alex Kapranos, Emma Pollock and Alasdair Roberts, it sees Hubbert’s acoustic guitar work combine with some well-known – and not so well-known – voices and players. And you know what? At times it’s brilliant stuff.

Hubbert channels his acoustic style (more traditional folk than flamenco on this record) through a post-rock filter, at various points reminiscent of Will Oldham’s sparse work on Seafarer’s Music. There’s maybe a bit of Labradford and Tortoise in there too, and a huge dose of Papa M’s terrific Live From a Shark Cage. However even with those guest starts, Hubbert’s singular vision makes this album very much his own.

Rumbling opener ‘We Radioed’ features the fine violin work of Luke Sutherland (Long Fin Killie, Mogwai) duetting with Hubbert’s guitar, creating a stormy beginning before rolling into ‘Car Song’, a slice of classic Arab Strap storytelling from Aidan Moffat.  Hubbert’s cyclical riffs combine with Moffat’s tale of reminiscence (“I used to swim over there; but that pub’s gone downhill/I made my very first and very last attempt at smoking on that swing bridge with Gillian Smith…we all loved Gillian”), and a wish for a simpler life:  “so let’s do it. Let’s sell our home and all our things/And buy a camper van and live on service station junk food and roadside pub lunches/We can burn our smartphones and donate the computer to the school down the road/Donate the clothes we never wear to the charity shop and just… go”. It’s a tale of hopefulness, carried by Moffat’s knack for a compelling story and Hubbert’s bright acoustic plucking.

Elsewhere, solo tracks like ‘For Joe’, ‘Switches Part 2’ and ‘V’ show what seems to be a huge debt to the work of David Pajo, with the chiming riffs and circular grooves at times mesmeric. His duet with John Ferguson’s banjo on ‘Gus Am Bris An Latha’ (Gaelic for “Until the breaking of the day”, a well-used expression on gravestones in the Scottish Western Isles) is utterly captivating and the best of the vocal-less tracks.

For all that the guests add a little extra to the musical offerings, Hubbert’s guitar work is strong enough on its own. ‘Half Light’ is one of the songs with vocals that don’t work: a gothic tale with singing from Emma Pollock, it never really gets going and ends up being a touch miserable and cold. The two other tracks with vocals fare much better: ‘Sunbeam Melts the Hour’ has curious Joanna Newsom-esque vocals from the Glasgow-based Finnish artist and musician Hanna Tuulikki, resulting in a Celtic/European gypsy folk song; and final track ‘The False Bride’ is the pick of the album, with Alasdair Roberts weaving a Scottish folk tale with a traditionally miserable and tragic ending:  “I loved a lass, and I loved her so well/I hated her all others that spoke of her ill/But now she’s rewarded me well for my love/For she’s going to be wed to another”. Hubbert’s gentle playing is sympathetic to the lyrics, resulting in a deeply sad ending to the record.

Thirteen Lost and Found is unfortunately unlikely to be played live in all its glory more than once or twice due to its collaborative nature, a shame given that it’s a marvellously played record and has emotional depth without excluding the listener. It’s further evidence, basically, that we should really start taking more notice of the talents of RM Hubbert.