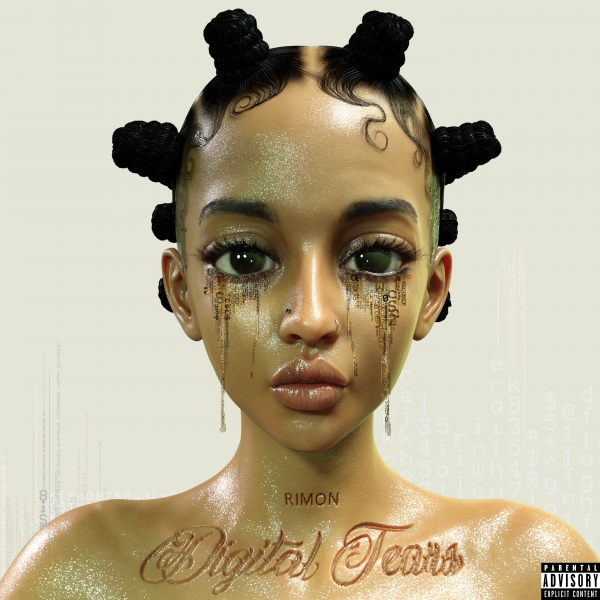 It’s pretty easy to find yourself too tied up in the digital world and conflict our minds on what’s real and what’s not, we’ve all been there in some way or another. RIMON’s latest EP adopts the digital persona ‘NOMIR’ and gains a sense of clarity at a dark crossroad that challenges misplacement, validation, cancel culture, and misinformation.

We are fully aware of RIMON as an R&B artist, yet she never fails to defy complexity when incorporating alternative genres in her songs. Whether it’s a 30-second electric guitar solo or it’s Denzel Curry’s effortlessly executed rap verse over Got My Back’s jazzy beat, it would be foolish to undermine RIMON’s capabilities.

The third EP from Rimon, when comparing it to her last two projects, 2021’s Digital Tears emerges victorious. As much as it’s a bold move to experiment with your sound and take a slightly different path from what many fans are used to, with all the muffled vocals, distorted sound-effects, and overly-autotuned tweaks in the sonic, this EP justifies its brilliance. Notable tracks include the killer opener “Been Around The World” which begins as a series of indecipherable electronic squeals and murmurs before introducing that sweet signature Rimon sound. Not to mention “Digital Tears” giving us a short, muffled hook, pleasurable enough to make a few hairs stand on end.

Though the spotlight shines on her angelic voice, Digital Tears expresses its realest moments when Rimon comes to terms with the more unpleasant issues prevalent in today’s globalised world. “Mountain Views” is probably the most heartfelt track, it touches on some of the devastating aftereffects of misinformation and injustice, briefly outlining 1989’s prejudiced Central Park Jogger Case. Whilst “iClout” discusses addiction to fulfil insatiable desires and sought-after validation with hip-hop duo Earthgang as a feature. Aside from the heavyweight these two tracks carry, they remain a blessing to the listener’s ears. With iClout’s timeless mix of hip-hop and R&B, it compliments a prestigious genre-duo that has proven its magnificence time and time again over the last few decades.

It’s safe to say that the title Digital Tears is aptly suited to the EP’s overall theme, with its perfect blend of peculiar electronics and authentic lyricism, both of which nod to something ever-so-slightly dystopian. It’s merely a marginal step in the direction of something extreme when left unchecked by mankind, but a step small enough to remain true to what Rimon executes the best - R&B. Because of this, the project concludes in a breath of fresh air. “20/20” is a smooth 5-minute ride that resonates with mother nature after gaining clarity from the five tracks which precede it. Feeling somewhat at peace with the world with its serene outro, Digital Tears upholds its replay value from the outset and throughout, never short of substance.