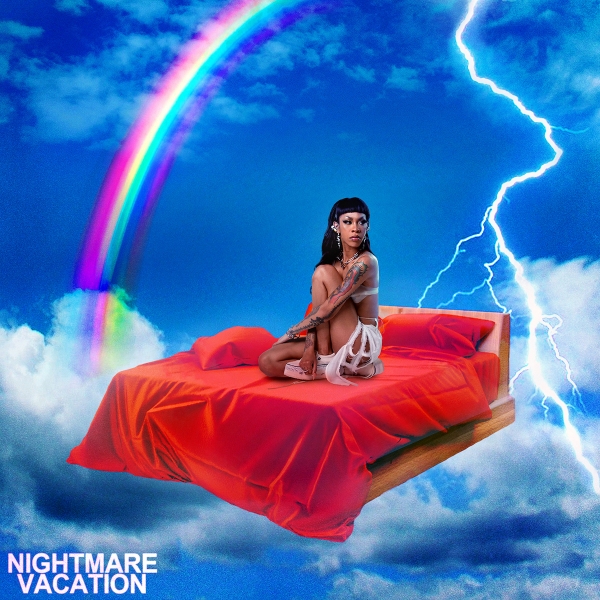 Following four wildly diversified mixtapes, Rico Nasty found her music being labelled as anything from the questionable “pop-punk” to the lazy “female rap” before choosing her own sound - “sugar trap”. For her debut full length album she’s doubled down on her versatility, kicked out the rear-view mirror and refuses to look before switching lanes.

As female artists have come to dominate rap, hip-hop - any genre they choose - one name has fought its way closer to the centre of the room—Rico Nasty. Still finding her place with a few lukewarm releases in 2017, it was 2018's "Smack A Bitch" that sucker punched an industry that hadn't been interested in celebrating the rage of women in rap.

It's not like Rico was the first person to rap and be angry, but she was certainly the first to do it so unapologetically, and she's definitely not interested in starting on Nightmare Vacation. The lines "Get the fuck out the way", "Shut the fuck up" and "Fuck you" run throughout this album. Whether she's throwing a party to rage in ("Let It Out") or acknowledging the copycats ("Check Me Out"), her wild and untamed delivery can't be sedated.

There's a utility in this album. All artists hope listeners can see a piece of themselves in their music but Rico takes it a step further, building a virtual rage room to vent, unwind, scream at the wall and break whatever's closest to you. This reaches its climax on "STFU" where she joins back up with industry dominating producers Take A Daytrip after they worked with Slowthai on last year's "Lighthouse". The instrumental is dark, the lyrics are crude and the delivery is ruthless, and while that's a label you could slap on this entire album, it's when she's begging her haters to shut up that the stars align perfectly.

Having already jumped on songs with the likes of Doja Cat, Kali Uchis, A$AP Ferg, Lil Yachty and more, Rico has become a guest verse that isn't scared to steal your spotlight or your fans. But when Rico brings in backup on her debut, she does so in a way that is totally fluid and inviting. She trades bars painlessly with Gucci Mane on "Don't Like Me" and has great chemistry with Aminé on the only song to reach the three-minute mark, "Back & Forth". That being said, "Loser" featuring Trippie Redd doesn't gel too well and catches Rico in a static moment compared to the post-apocalyptic scene she's painted with the rest of the album.

It's when Rico's left to her own devices that she excels. The four songs on the album that feature other artists only hit the brakes on the freight train she keeps you on from the hard-as-rocks and Lil-Wayne inspired opener, "Candy", to the closing nostalgia of "Smack A Bitch". The 100 Gecs produced songs "OHFR?" and "IPHONE" blend Dylan Brady's distorted and mosh-inducing style that took 2020 by storm with Rico's unfiltered system for inciting a brawl—a collaboration that brings together two of the most viral artists from this year.

After becoming something of a phenom for her versatility as both a wildly exciting rapper and a natural hitmaker, this album is something her fans had been eagerly anticipating and the industry had been needing. While 2019's Anger Management showed her off as a maleficent talent with a taste for blood, Nightmare Vacation is Rico at her nastiest.