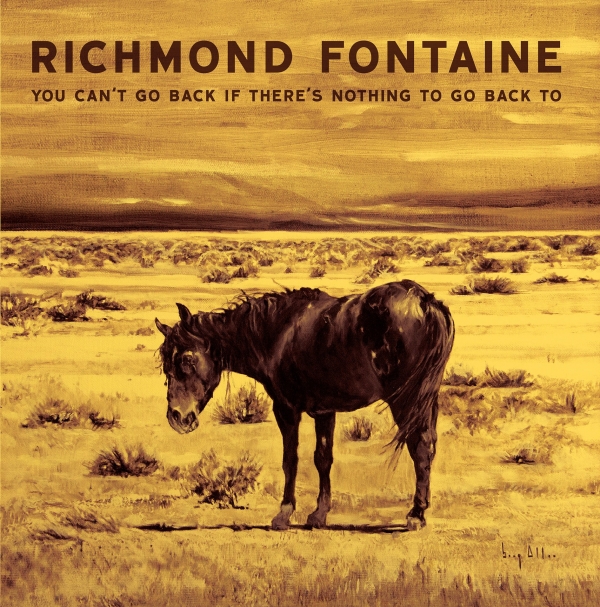 Some acts become cult concerns accidentally. Others seem to half-consciously pursue a life in the margins by their choice of musical settings and subject matter. Portland, Oregon’s Richmond Fontaine belong to the latter category.

Having started as a high-octane cow-punk bar band in the early 90's, the four-piece - aided and abetted with a rotating cast of guest musicians and producers - have evolved a great deal musically over the years, reaching something of a peak with 2004's near-perfect widescreen Americana masterpiece Post to Wire and maintaining similarly lofty standards ever since. Whether lunging ahead in full-blown rock 'n' roll mode or slowing down for bone-dry minimalism, their dedication to grittiness - picture a Crazy Horse comprising of bar-room toughs rather than hippie era survivors and you're not far from the shit-kicking crunch of RF in full flight, whilst their stripped-down moments (check out the dust-blown desolation of 2005's The Fitzgerald) make Nebraska sound like happy hardcore - and cataloguing the lives of characters caught in an unstoppable downward spiral of debts, dead-end jobs, bad decisions and worse luck has remained steadfast. Imagine Springsteen of Darkness On The Edge of Town and The River with every ounce of the crowd-pleasing, engine-revving romance removed, and we're approaching main songwriter Willy Vlautin's unflinching gaze on beleaguered blue collar lives; in this world, there's no relief through racing in the street as having enough money to run a car is a laughably distant prospect, and dreams of new starts - deciding you were, after all, born to run - are scuppered by the fact that whilst you can escape your physical surroundings, you can never quite run away from yourself and the inbuilt capacity for self-sabotage. In many ways, these doomed dreams of a better life somewhere, anywhere else form an unofficial theme for You Can’t Go Back If There's Nothing To Go Back To, an album of songs about lives in turmoil-fuelled transit as thoroughly drenched in regret and wasted opportunities as the despairing title suggests.

Richmond Fontaine's 10th studio album differs from the norm in one crucial aspect. According to Vlautin, the band will cease operations after this album and the upcoming tour. In this light, and considering the departure of founder member Dave Harding (who guests on acoustic guitar) and Vlautin's ongoing post as the songwriter and guitarist for much-acclaimed country-got-soul act The Delines, it's tempting to look at the album's title as a commentary on a veteran band on its last legs, a weary lament about the groundhog's day existence of a cult act that doesn't have anywhere left to run following 20-odd years of repeat visits to the world's discerning rock holes and crafting remarkable records passionately cherished by the few and roundly ignored by the masses.

Any such notions of diminishing inspiration exit pretty hastily once you press play. Whereas the oppressively doom-laden narrative of 2011's anxiously churning garage-rock opera The High Country, weighed down (surprisingly so for a writer of novels as powerful and nuanced as the excellent The Free, which builds and expands brilliantly on the concerns of Vlautin's songwriting) by one-dimensional baddies and excess gloom - sounds from this remote like the work of a band trying too hard not to do "just another record", You Can’t Go Back... returns the focus on Richmond Fontaine's core strengths: Vlautin's ability to draw completely convincing characters in equally believable jams in a few terse verses, and the band's seemingly telepathic understanding of how these downtrodden tales can best be set to music that perfectly complements the songs' sentiments.

It's a certified slow-burner, however. At first, the songs don't quite seem to cohere into anything more than OK-ish revisits to the band's oft-visited hangouts; you know you're in trouble when the best cuts on a Richmond Fontaine album seem to be the tear-stained, evocative instrumentals. Keep at it, though, and tracks like the heartbreaking "I Got Off The Bus" - having burnt all of his and probably some other people's bridges as well, the protagonist returns to his hometown to find, well, nothing at all - gradually build up a wounded majesty that's almost unbearably moving. There are subtle hints that we're dropping in to see how characters of past Richmond Fontaine tunes have fared over the years - not brilliantly, as it happens - on tracks like the uncharacteristically bouncy "Let's Hit One More Place" and the slow-burning sway of "Whitey and Me".

There's one absolute classic here, too. The haunting and haunted “Night In The City” offers a devastating account of a mid-life crisis; not the sort of stuff that rock songs usually bother with, which makes the tune all the more refreshingly, palpably real. Disgusted with the increasingly constraining mess his life's become, the protagonist heads out on the town with a sleazy co-worker, but the boozy act of rebellion becomes "just a drag...like a weight that's not enough to drag you down." The scope and weight of Vlautin's writing here is much closer to the short stories of such like-minded authors as Larry Brown, Lucia Berlin or Raymond Carver than conventional navel-gazing confessionals. In lesser hands, material like this could very easily become unbearable misery-fest, but Vlautin infuses this and the equally impressive, folky "Three Brothers Roll Into Town" - a beautifully observed tale of young lives circling ever closer to the plughole that sounds like it's been around forever- with empathy and warmth that makes us root for the characters long after they've stopped believing in themselves. Anyone who thinks that Vlautin's admittedly limited singing voice isn't a palatable instrument should check out "I Can't Switch It Off If I Wake Up And Remember"; on paper, the song's relentless litany of disaster, death and despair almost toys with self-parody, but Vlautin inhabits the vocal so convincingly - musical method-acting, if you like- that the only option is to believe and be moved. Although more of The Delines is reportedly on the cards, it'd really be a shame never to hear Vlautin front his own songs again.

As ever, however, You Can't Go Back... is a team effort. Vlautin's songwriting might be the band's USP, but it takes the increasingly versatile musicality of the band - complimented by the rich textures provided by keyboardist Jenny Conlee of The Decemberists and The Delines and long-time pedal steel sidekick Paul Brainard - to elevate the record from great writing to a great listening experience. Although they gave up straight-ahead country-rocking with 2002's Winnemucca, Richmond Fontaine are still saddled with the somewhat regressive 'alt. country' tag, a bit of a narrow shorthand for a band who are capable of accessing all areas of the great American rock 'n' roll 'n' roots tradition with equal aplomb. If this really is the end, You Can’t Go Back... is more than a worthy addition to the story of a band who leave behind one of the - if not the - richest catalogues in sunny-side-down American songwriting; only a few slightly stale rehashes of familiar templates towards the end keep this from achieving the lofty standards of, say, 2009's We Used To Think The Freeway Sounded Like The River. Their exit won't be marked by the kind of attention that greeted recent, much-mourned musical departures, but for those in the know, Richmond Fontaine have accrued a legend of almost similar stature.