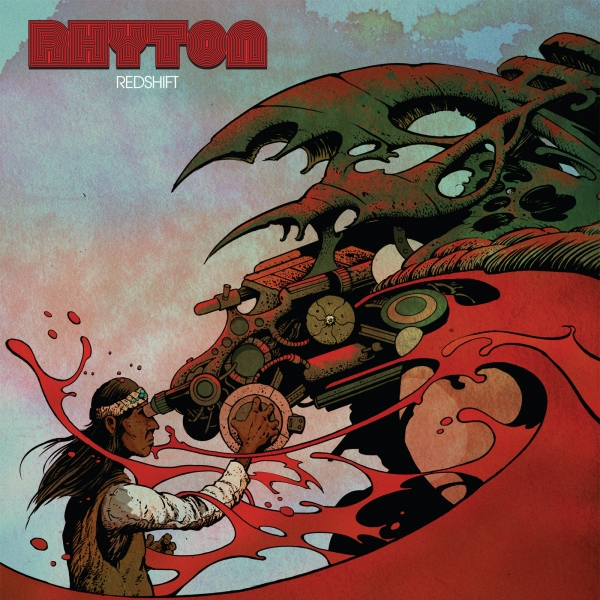 Rhyton are a band just out of the reach of genre tags and RIYLs. If their identity has a single three-dimensional face, it is visible in the concepts that initiate their exploratory music, not in its final results.

The most disorienting song on Redshift is also the most immediately accessible one. After the serpentine, bouzouki-accented instrumental opener, “The Nine”, Dave Shuford’s barrel-chested half-twang leads the title track. “Redshift” is a plucking country rock shuffle with increasing psychedelic lapses that gradually dissolves into a sci-fi meltdown, revealing the front porch to actually be a space ship. Its counterpoint on the other side of the album is a cover of the Joe Walsh/Barnstorm song “Turn to Stone”, putting a lithe, stoned spring in the step of the early ‘70s arena rock original.

Redshifts in light waves occur when there is expansion or increased distance. Shuford, Jimmy SeiTang and Rob Smith were already coming from pretty far out places such as No-Neck Blues Band, Psychic Ills, Stygian Stride and Pigeons. Their bona fides in the improvisational scene preceding them, the Brooklyn trio wander off into hypnotic tremolo spirals (“Concentric Village”), unwound Haight Ashbury head trips (“D.D. Damage”), and ominous tranquility from inside the machine (“The Variety Playhouse”). Seldom if ever, though, does Rhyton not know their way back.

The element of surprise is clearly of some importance to Rhyton, but they have their own kind of consistency. Redshift plays with similar modes and motifs as previous albums of theirs like Kykeon from 2014, and it’s clear that the band hold tradition in regard. Pulling out the stitching from vintage rock sounds, they liberate its cloth from the need to fit over preset shapes.