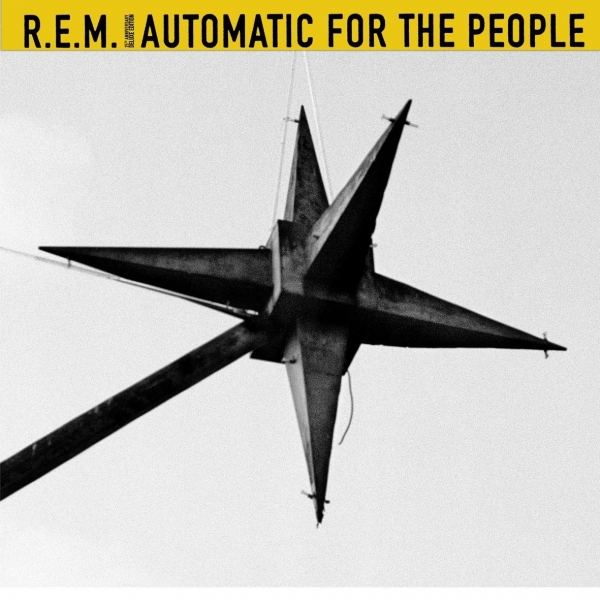 R.E.M.’s Automatic for the People is one of those rare records that is impossible to rip from where it initially clung, leech-like, to individual lives; both when it was released in 1992, and then again in each subsequent year.

It is known so intimately by so many people – to date it has sold over 18 million copies – but it somehow manages to retain its original sense of oblique mystery. This is partly due to the album’s willfully oblique lyrics, unconventional instrumentation and song structure, but it’s also because of its ubiquity: it’s such a constant presence in the lives of a certain generation – even 2 or 3 generations – that its original meaning is stripped, obscured by time, and replaced with subjective projection. It’s one of only a handful of records that seemingly belong to everyone; from those who hear it occasionally on car stereos, to those who pore over lyrics alone at 3 in the morning – especially those who see themselves in its coded but authoritative depictions of queerness. Even the title Automatic for the People – taken from a diner slogan in R.E.M.’s native Athens, Georgia – has transformed into a kind of mission statement.

Released in October 1992, Automatic… was, like its predecessor and major chart breakthrough Out Of Time, received with both universal critical acclaim and huge commercial success, reaching number one on the UK charts and generating six singles. Its mood was notably darker, however. Preoccupied with death and its aftermath, even its lighter moments are bittersweet, nostalgic odes to the unattainable past.

Each song contains a subtle way in for the listener: The mysterious scene-setting of “Sweetness Follows” sees the protagonist(s) “readying to bury your father and your mother,” followed by Stipe breaking the fourth wall, inviting us in to wonder “How did it feel when you lost another?” “Monty Got A Raw Deal” is ostensibly concerned with the death of Montgomery Clift, the Hollywood star who died a recluse in 1966, disfigured from a car-crash and addicted to painkillers and alcohol after years of hiding his homosexuality for the sake of his career; but it’s also about the struggle of any person seen as an outsider by society to suppress their true self, and what they lose in the process. Of course, Michael Stipe was writing from his own position of (then closeted) bisexual celebrity, both in the song’s frustrations and in its brief, ironic admissions to joy in queerness – the observation that “virtue isn't everything” is a knowing wink to traditional notions of non-hetero desire as inherently immoral.

This tease of willful perversity is wholly realised in “Star Me Kitten,” which is characteristically oblique but also one of the most sexy and convincing depictions of fluid sexuality on record. In the 1990s, R.E.M. – and Stipe especially – began to fully explore the duality of hard and soft, masculine and feminine that had been germinating in their music and aesthetics since the 80s: Think the glam glitter identity crises of Monster, or the image of Stipe’s stomach muscles enveloped in sheer sarong fabric onstage in 1998. This arguably began with “Star Me Kitten,” where Stipe’s blunt, sexually demanding delivery is set against Peter Buck’s languid, reverb-drenched guitar. Both sides of Stipe’s sub/dom persona are present lyrically – he brags to his soon-to-be-ex lover that “Keys cut, three for the price of one… I’ve changed the locks and you can’t have one”, but flips it immediately, almost begging for them to “Fuck me kitten you are wild / And I’m in your possession.” He’s dominant, then submissive; controlling, then forgiving; one, and then the other, and then both. Although not explicitly queer – none of R.E.M.’s work is, or has to be – it oozes a sexual experimentation and deliberate cruelty that is genuinely transgressive in the face of conservative ‘values’, both in the post-AIDS world of 1992 and, sadly, in the contemporary climate.

So many moments on Automatic… that have filled in the cracks of our lives become surprising under scrutiny: In “Sweetness Follows”, the cunningly simple admission that “It’s these little things that can pull you under” becomes a self-fulfilling prophecy, loaded with the ability to break you when you’re just holding it together. “Everybody Hurts” has become self-parodic in its ubiquity, but its climactic swell of strings is undeniably moving. And in the context of an album so polished and perfect, is there anything more revelatory in its vulnerability than the giggle in the third chorus of “The Sidewinder Sleeps Tonight”?

Automatic…’s final two tracks are a compound masterpiece of nostalgia. Just as “Sweetness Follows” invites the listener to fill in its skeleton with personal experiences of death and grief, “Nightswimming” provokes youthful reminiscence: It originated in a specific memory, or combination of memories, from Michael Stipe’s life – the symbolic liberation of teenage skinny-dipping in Georgia – but it’s also equally representative of the time you sat up to watch a meteor shower with someone you just met, or the time you listened to Automatic… in the car with your best friend a few weeks ago, both destroyed by the world, sitting in the carpark and listening to the last two tracks because you had to listen to the full thing, like it was medicine. It’s millions of individual moments of peace and autonomy in a world of pressure and difficulty, romanticised and retold and repurposed for comfort.

“Find The River” is almost a coda – a lesser band would have seen fit to finish on the suckerpunch of “Nightswimming” – and it’s the album’s most optimistic moment, the sound of keeping going when you can’t physically stand, a triumph of pastoral imagery (“Me, my thoughts are flower strewn/Ocean storm, bayberry moon”) and simple melodic optimism. It’s one of the most comforting songs ever recorded; even more so when you consider the potentially innumerable lives over the past 25 years who have found the resolution that it invites the listener to go in search of.

The 25th anniversary reissue offers a disc of live tracks, and a full set of demos and early versions – interesting historical documents for the completest. But the real joy of the reissue is how it prompts those of us who have moulded ourselves around it, or had it play for years almost subconsciously in the distance, to reconsider its place in our lives: to hold it up to the light and see that it is miraculous.