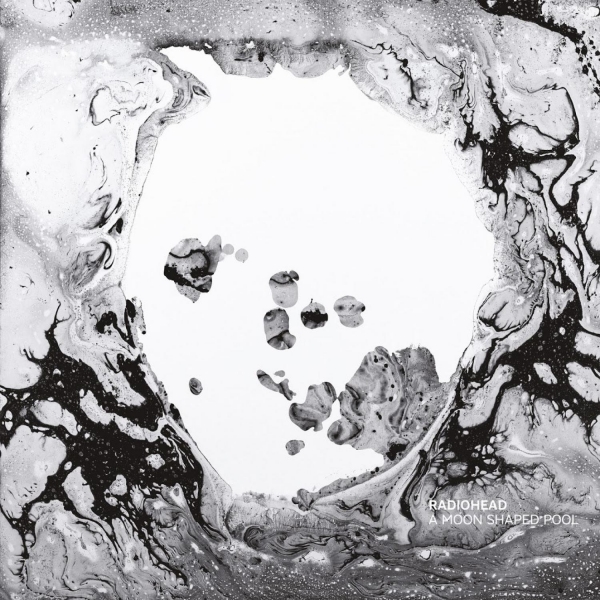 Mourning can be a potent muse. For many, it simply necessitates transmission as a purgative statement, lest the opportunity to pick its lock is passed up and corroded over time.

A confrontation with reprieve and recovery amidst the aftershocks of sudden loss, Radiohead’s ninth full-length album, A Moon Shaped Pool, sees Thom Yorke opting for masterfully earnest self-therapy over silence, tearing up the floorboards of his recent split from his partner of 23 years to expose a realm haunted by the phantasm of fading memory. With such a crucially human impetus serving as its backbone, even a wilfully glib listen here reveals a band whose sheer elemental sorcery is at its most commanding once more.

Having signalled its arrival via cryptic flyers and erasing much of their digital footprint last week, A Moon Shaped Pool mirrors this deep need to essentially reboot the system. Paired with Paul Thomas Anderson’s video for the release’s second single "Daydreaming" – a wonderfully topsy-turvy effort culminating in 47-year-old Yorke iterating an eerily-reversed mantra of "Half of my life / Half of my life", all Jack Torrance on a snow-capped mountain – the album’s unambiguous and very personal central impasse gleams into sharp focus. While the beat-heavy abstractions of 2011’s The King of Limbs impressed (and are very likely to age gracefully) A Moon Shaped Pool stems from such a vital and private place that its quiet cohesion yields some devastatingly beautiful results.

A nigh on voyeuristic traipse through psychic acclimatisation, backwashed thoughts and lingering anxieties, there is a meditative restraint to AMSP that feels borderline conceptual in its placid ebb and flow. Resisting the urge to stretch the frontiers of experimentalism even further, the ambient-acoustic minimalism that demarcates the album is conducive to the overarching melancholia that – whilst a well-worn seal of the band’s lure for many years – is at its most exquisite for quite some time. In choosing to bypass the madly exploratory; in perhaps entertaining the pure notion of an almost Nietzschean Eternal Return to tried-and-tested modus operandi, Radiohead tap into easily some of their finest material to date.

Musically, we’re treated to a host of new, subtly-wielded scenes in a largely familiar landscape. With Jonny Greenwood's sublime and perfectly poised orchestral arrangements taking centre-stage on several tracks including the softly off-kilter piano spell of "Daydreaming" and highlight "The Numbers" (a cyclical and soothing tale formerly known as "Silent Spell"), opener "Burn The Witch", with its jutting strings and prophetic Kraut-electro pulse serves as the album’s most pressing effort. Viewed with the varyingly subtle majesty of its succeeding ten songs firmly in mind, it almost feels like they’re getting the bellow out of the way; an introductory expulsion before the protracted calm.

"Decks Dark" is particularly imposing early on. With its tinkling keys, gorgeous choral vocals and bobbing groove, it forges emotional dissolution with the fear of extra-terrestrial invasion. “Have you had enough of me, sweet darling?” Yorke probes, a spectre (who’s Sam Smith again?) suspended in some unknowable ether. Bleeding into "Desert Island Disk", with its weaving acoustic-folk patterns and expectant closing refrain of “Different types of love are possible”, it’s not long before AMSP starts to feel like something akin to eavesdropping. With Philip Selway’s rhythms either expertly inconspicuous or absent and acoustic/analogue textures winning out over the heavily-processed ruminations of yore, Yorke’s fresh wounds are expounded by way of near silence.

A mid-album peak, the baleful industrial swell of "Ful Stop" divvies serene territory with skilfully repetitive Motorik dread. “You’ve really messed up everything,” Yorke charges, his foreboding half-grin almost detectable through the soundwaves. Rupturing from bass, drums and panned synth feedback half way through, it bursts into glorious full-band Technicolor, its driving cadences, glimmering arpeggios and strutting bass melding to evoke prime Radiohead at the turn of the century. Better said, pooled with the likes of the slinking, "Idioteque"-esque "Identikit", the unravelling splendour of "Tinker Tailor Soldier Sailor Rich Man Poor Man Beggar Man Thief" and several other cuts here, mentally slotting AMSP in between Amnesiac and Hail To The Thief isn’t without its reasoning. This is a return to pure quintessence.

But it’s Yorke’s candid delivery that lucidly seals the deal throughout. “As my world comes crashing down/I'm dancing, freaking out/Deaf, dumb, and blind,” he imparts on "Present Tense", sidestepping ambiguity in favour of the muted primal scream. In almost each song’s closing refrain, we’re offered yet more insight into his passage of transition from “there” to a gradually unravelling “here” ("One day at a time" on "The Numbers", “All the good times / Take me back again” on "Ful Stop", “[I’m just happy to serve you] half of my life" on "Daydreaming", "In you I’m lost" on "The Present Tense"). This is the sound of a man coming to terms with personal restoration, framed by a worrisome world. With the proverbial rug pulled from under his feet, he paces the grounds of a home in which he no longer resides, longing for past time.

A live fan favourite for a baffling 21 years now, there is, of course, certain extra-poignant import to a long-awaited studio version of "True Love Waits" closing AMSP. Right up there with Radiohead’s most effortlessly transporting lullabies, its sad lilt of piano and vocals just distils that ineffable quality of vulnerability that Yorke can dredge so memorably. “Don’t leave / Don’t leave”, he implores, disembodied, his once scribbled words from a bygone time now weightier than ever before. Embodying that impervious inner spirit that Kafka called the Indestructible, where the possibility of perfect happiness exists in spite of everything else, its calm resignation defines what A Moon Shaped Pool strives for. In honing that potential from start to finish, Radiohead have excavated their most accomplished album in at least 15 years.