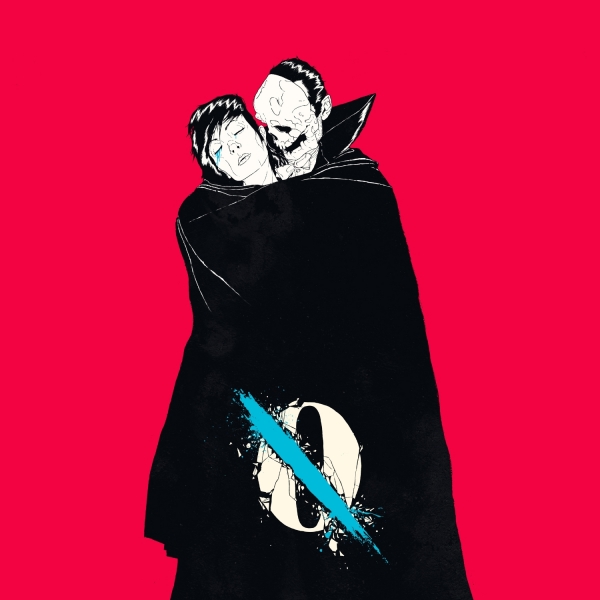 When a band that had previously averaged a record every two years suddenly goes six years without a new one, it’s a pretty clear indication that things are running like anything but clockwork. We’ve heard nothing new from Queens Of The Stone Age since Era Vulgaris back in 2007, although that’s certainly not to say that they’ve kept a low profile over six enormously tumultuous years.

Josh Homme formed Them Crooked Vultures with Dave Grohl and John Paul Jones, produced an Arctic Monkeys record, welcomed a second child into the world and ‘died’ on the operating table during complicated surgery. Long-time drummer Joey Castillo recently took his leave, whilst live member Natasha Shneider succumbed to cancer in 2008. Former bassist and now-guest contributor Nick Oliveri kept things relatively quiet by his own standards, with just the one drug-fuelled stand-off with a SWAT team. That the band actually managed to get anything done is in itself impressive, but frequent laps of the festival circuit and a tour revisiting their self-titled debut helped keep them prominent.

What Queens of the Stone Age really needed to do with …Like Clockwork was to tap back into the songwriting vein that produced the snappy, incisive likes of ‘The Lost Art of Keeping a Secret’ and ‘Feel Good Hit of the Summer’; Vulgaris was huge fun in places, but overwrought and ponderous in others, often failing to produce the kind of short, sharp shock that the band do so well. Opener ‘Keep Your Eyes Peeled’ isn’t hugely promising in that respect; the record trudges into life, Homme’s vocal acrobatics and intermittent, scratchy guitar pinned down by a sluggish, menacing bassline.

It’s surprising, then, to see it followed immediately by ‘I Sat by the Ocean’, which sounds like the Californian cousin of Blur’s ‘Coffee and TV’; it’s not Queens at their heaviest, but certainly not far from their catchiest – it’s one of the poppiest songs they’ve ever written. Perhaps surprisingly, given the circumstances of the period of its inception, Clockwork is a wonderfully measured record; you perhaps couldn’t have blamed Homme if he’d wanted to get into the studio and rip through ten loud, intense rock songs, but his songwriting has turned out to prove far more restrained than anyone might’ve predicted. ‘The Vampyre of Time and Memory’ is, at its core, a piano ballad, and yet manages to make the climactic guitar solo fit neatly, whilst ‘I Appear Missing’ moves slowly, deliberately, from a simmering opening to sprawling epic of a finish that suggest no loss of the sense of dramatic riffery that’s underscored past full-lengths.

Those looking for more typical rock fare are definitely catered for – it’s hardly surprising that ‘My God Is the Sun’ slotted seamlessly alongside older material during the band’s South American shows earlier this year, and ‘If I Had a Tail’ revisits their debut’s ‘Walkin’ on the Sidewalks’ – but the real excitement’s to be found in more experimental territory, irrespective of how successful said efforts turn out to be. The unlikely collaboration with Elton John on ‘Fairweather Friends’ provides a furious rocker that’s just the right side of gaudy, with frantic work from studio stand-in Dave Grohl proving he still has plenty to offer from behind the kit. ‘Smooth Sailing’ is an assured stab at stomping funk, although the meandering ‘Kalopsia’ serves as little more than an uneventful mid-album interlude.

Regardless of how established you are, it takes real nerve to return from six years away with a record as stylistically diverse as …Like Clockwork. It’s bound to throw the band’s fans, especially those with a particular hankering for the more straightforward likes of ‘No One Knows’ and ‘Go with the Flow’, but the self-assuredness that Homme so often projects onstage and in interviews has served him very well indeed; by having faith that his songwriting ability would stand up to being thrust into unchartered musical territory, he’s overseen the making of a tight album that has a cohesiveness that belies how open it is to new – and genuinely exciting – ideas.