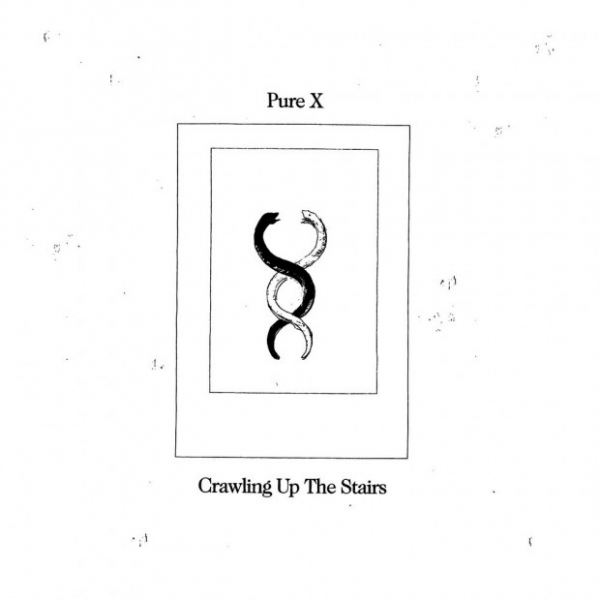 From a creative and personal standpoint, reaching a moment where crawling is the only real way you can move forward typically represents a crushingly low period for an artist. So, by Pure X titling their second record Crawling Up The Stairs, you know damn well going in that it’s going to be a dark, heavy listen.

Yet, within the raw despair and utter anguish that courses through their stirring new batch of songs, the Austin, Texas trio have also layered a subtle optimism and slight hope. For indeed, the title does mention going up the stairs after all, and that promising direction suggests a light awaits after this lingering period of darkness, giving the album some necessary depth and life that prevents these songs from getting dragged down in a hopeless abyss of misery.

Frontman Nate Grace went through plenty of personal turmoil to make it to this point, after suffering a serious leg injury while skateboarding and not having any insurance to cover the necessary surgery, he struggled to reach a point where he could finally walk again. And meanwhile, while Grace was fighting to stand, the rest of the band were caught in a state of creative stasis that kept them immobile in their own way. Crawling Up The Stairs was born out of that wretched sense of unrest and toil, with the group throwing themselves desperately and passionately into their new album simply because that was the only thing left for them to hold tight to at that point.

And while Stairs represents a subdued sonic departure from the guitar drenched hazy atmospherics that permeated Pure X’s stellar debut, Pleasure, these new songs still pack the same textured musical punch, just drawing from a deeper, more vulnerable source. The ethereal title track serves as a hushed introduction to the proceedings, leading into the desolate, somber plea of ‘Someone Else,’ which has you haunted and broken before it even hits the halfway point. But rather than reveal their fragile emotional state so plainly, the band retreats into the psychedelic excursion of ‘Written In The Slime,’ which could be about anything after all, but the grimey title - and the overall tone of the record itself – suggests aspirations that have been dragged through a foul mire.

The ominous, post-disco pulse of ‘I Fear What I Feel,’ lets bassist Jesse Jenkins and drummer Austin Youngblood lock in and dynamically lead the track into the dark corners of a dance party at the end of the world, with Grace admitting how tired he’s grown from the pain. Heavy, heady stuff, no matter how funky the groove is. The vibe is a bit lighter on ‘Things In My Head,’ even if the subject matter remains rooted in Grace’s fatalistic musings. And things obviously won’t get any brighter on a song named, ‘Shadows And Lies,’ with Pure X heading towards The Downward Spiral in both the slow-burning squall of the song structure and Grace’s vanquished histrionics.

‘I Come From Nowhere’ and ‘Never Alone’ both have a warped, Beatles-like churn to them, sounding like devilish Sgt. Pepper’s outtakes filtered through a harder and heavier drug use that doesn’t have an eventual bright side nor a Ringo to save them. The second half of the record snaps out of its hazy psychedelic muddle with the urgent accusations that lie at the unsettled heart of the raucous ‘How Did You Find Me,’ which is driven along by Grace’s fiery guitar work and his ragged vocals. But the song speaks to the subject getting found at his one of their darkest moments, with a positivity and pop sheen buried within the tempestuous arrangement.

The album winds to a graceful close with a trio of songs that all contain rebirths and new starts, with the hopeful acoustic strum of ‘Thousand Year Old Child’ leading fluidly into the Zeppelin-like interlude, ‘Rain At Dawn,’ before the record closes with the promising electronic swing of ‘All Of The Future (All Of The Past),’ which has a bold, vibrant spirit to it that suggests that better times lie ahead, we just have to make sure we’re there to enjoy it. Dark elements permeate the menacing corners of Crawling Up The Stairs, and while it may have been a long, grueling journey to get through, it seems that by the end of this bumpy road, Pure X have reached a positive creative terrain that suggests their long climb up the from the bottom was worth all the effort and pain it took to get there.