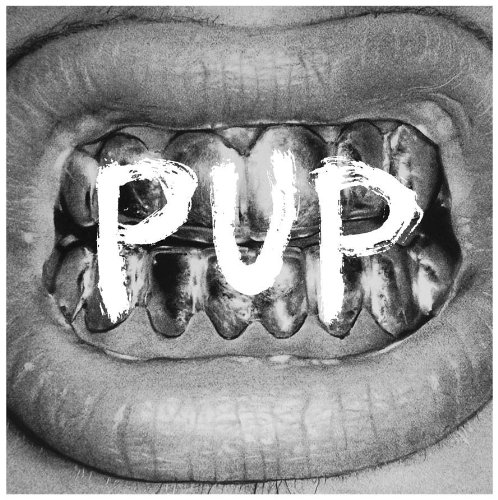 PUP is one of the most self-aware bands in music. Their music video for “Reservoir,” a single from their self-titled debut, finds the band playing an intense show in a tiny club. As they play, the band’s equipment begins to fall apart: guitar strings snap, drumsticks break and the microphone stand can’t decide what height it wants to be at. Then, the chaos turns to the band members. Injuries sustained include facial laceration, knocked out teeth, and chest impalement.

And, given the Toronto quartet’s brand of hardcore, that sounds about right. Wind-milling guitars abound over percussion running dangerously close to running off the rails in many places. Add to that a sinister bass that alternately lurches and lunges whenever it pleases. Combine all this with guitarist/vocalist Stefan Babcock sounding like he’s constantly on the verge of having a breakdown, whether he’s singing, shouting, yelling or screeching, and you’ve got a fantastic hardcore band.

What’s makes PUP an engrossing listen, though, is also what takes it beyond a typical hardcore record: there’s sunlight that refuses to be shut out from the overcast skies. Yes, this is a hardcore (and post-hardcore) album. But, it’s hardcore played with gleeful abandon. Songs like “Dark Days” and “Mabu” see the band trade in a portion of discord for dance-rock and churning power-pop, respectively. There’s still spasming guitar and drums, but it’s paired with restraint on the former and a midly swaying melody on the latter. And when the band submits its take on a power ballad in the form of “Yukon,” none of the intensity is lost despite the pace being halved. The guitars are no less bitter here than the lyrics (“In the Yukon valley where you left me on my knees.”).

Gems like that are found all over this set, too. As in-your-face the music is (especially Babcock), the lyrics are just as much so – and with just as much of a “sunny” demeanor. Hell, the record opens with Babcock demanding, “How many times have you lied to my face?” before quickly following up with, “I can’t confront you and it’s better that way.” Elsewhere, on “Dark Days,” Babcock states that, “When everything is gone, there will be nothing left to lose.” That may come off as juvenile apathy, but it’s more of a realistic assessment given the we-shall-overcome chorus: “This winter hasn’t been so rough/ It was cold, but still it wasn’t cold enough/ To freeze the blood beneath our spine/ And at least I survived.”

Which brings me back to the video for “Reservoir.” The opening shows a few people (presumably fans) bringing extra equipment for the show including drumsticks, a guitar, and a microphone – stuff the band would surely need later. Still, it’s the guy at the end of the line that sparks curiosity – he has a portable defibrillator. And moreso than any other backup item, it’s needed to revive Babcock just so he can finish the song. In essence, the band has to find a way to simply survive the show, despite all the hazards thrown at them. Likewise, the best hardcore punk has always been about endurance; in PUP’s case, it’s a tad more literal than that.