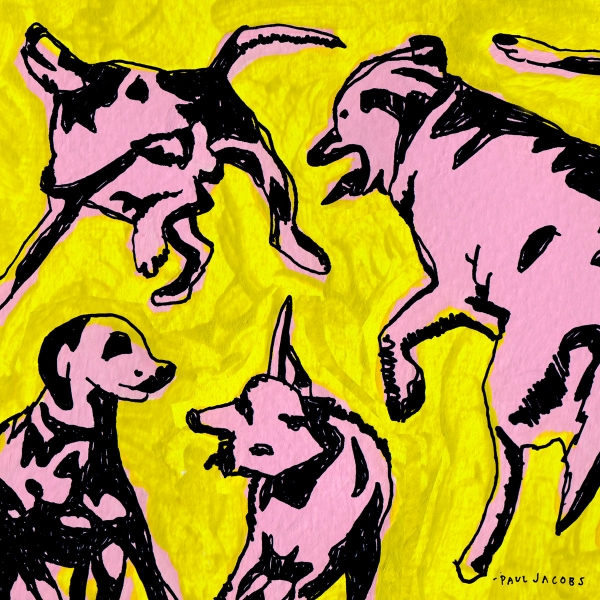 Residing in the ever-artsy Montreal, Paul Jacobs – drummer for post-punk weirdos Pottery, who released their debut LP Welcome To Bobby’s Motel last year – has been keeping himself busy creating music, art, and animation. After a vast stretch of crafting DIY, quickly-put-together sounds, his latest outpouring, Pink Dogs on the Green Grass, takes more of a breather in its existence, proclaiming “If you want to make music that’s truly timeless, you might as well take your time”.

By refining over 40 unfinished demos into 13 fully-realised tracks - and writing about “those unwanted moments in life that stick with you” - Jacobs has wound up creating something more thoughtful, melodious, and organic than he has before. The result is a welcoming warmth of hazy percussion-driven psychedelic rock, showcasing his vast multi-instrumentalist talent and creativity.

In also creating the artwork - and animating the music videos himself - Jacobs is bringing to life a very Warhol-esque pop-art world, and much like this ironically vastly commercialised artform, Pink Dogs is generally a pleasantly palatable record.

Written on bongos, “Christopher Robbins” is a tropical opener to a wholly vibrant and colourful album. Easing into an ambling forest adventure of “Day To Day”, with its folky flutes and lethargic vocals, Jacobs constructs a weary but dreamy sun-dappled trip, a scene which traipses its way through the track listing.

Certainly, other moments can feel a bit more hypnotized and intense, like “Cherry”, a dazed and swirling love song to the colour red, or the more involved grumbling psych-rock of "Half Rich Loner’". In contrast, a clear standout for interesting narrational value is the stream-of-consciousness murmur of “Dancing With The Devil”. Telling of the mundanity of the working week for someone who can only think of the fun to come at night, Jacobs growls his often-indistinguishable words to a repeated bass line, drawing you in to this darker chronicle.

Ultimately, the overall feel of the album is one of warmth and heart. “Glory Days Yesterday” is a fuzzy kaleidoscope of Tame Impala level psychedelia. Jacobs shows both range and ingenuity with Pink Dogs on the Green Grass, while staying true to his percussive background and art style.