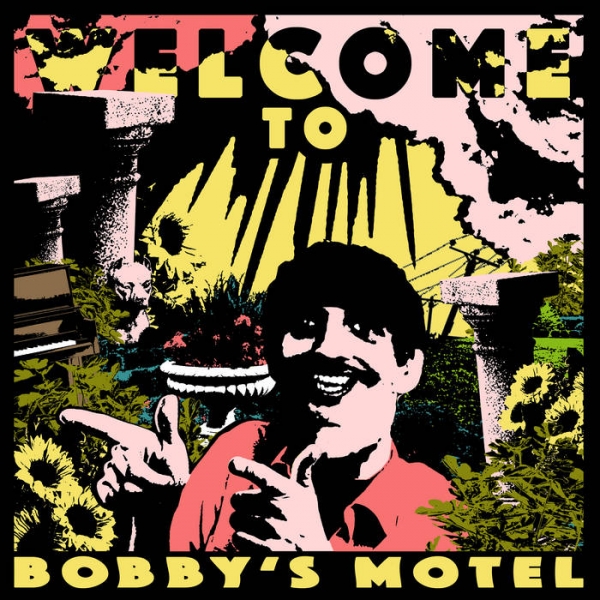 When reality seems like an impossible place to be in, it feels so good to be able to lose yourself for a while in the rowdy, funky world of Bobby’s Motel.

Fresh from Montreal, Canada, Pottery are part of the new ilk of weird, percussion-heavy post-punk, and with its propulsive grooves and untameable personality, Welcome to Bobby’s Motel has got to be the most sumptuously enticing debut album of the year.

Already standing out for their live shows (supporting the likes of Parquet Courts, Fontaines DC, Viagra Boys), Pottery’s first release, No. 1 EP of 2019 was an addictive taste of their astutely turbulent craft, with Austin Boylan’s vocal flair unavoidably comparable to that of Mr David Byrne. But Bobby’s Motel is a full banquet of engulfing, welcoming joy.

Released on Partisan (and coming out on “Hot Dog yellow” vinyl), the record and a tour were originally scheduled for April/May, but having to wait a few couple more month for this album has only made it even more satisfying. With artwork and music videos done by their own drummer-creative extraordinaire, Paul Jacobs, Bobby’s Motel is a big, bold slap in the face right from the start. Manic Bobby greets you at the door, takes you by the hand, and leads you straight to the dancefloor.

Their most recent single, “Hot Heater”, has been keeping us warmed up until the album arrives; with primitive, earthy beats and Boylan’s guttural calls, it draws you in and makes you move your feet. More illustrious percussion pings around your brain all over the album, and guitar tones scope from gravelly to groovy to frantic, through “Under The Wires”, “Bobby’s Forecast”, and the uncontainable “Down In The Dumps”.

Down another corridor you will come across a stark contrast of lavishness and affection on tracks like “Hot Like Jungle” and “Reflection”. With the lights down low, and Boylan’s soulful voice fully on display, Pottery unexpectedly seduce you with reverberating tenderness.

We might have noticed the warning signs early on, that this album would be no ordinary experience. With the surrealist Zappa-esque characters of their “Texas Drums pt. I” video inviting you in, it’s obvious that we’re in with an eccentric crowd here. But don’t even think abotut trying to fight it. You might as well make yourself at home, because Bobby’s Motel is the safest place to be.