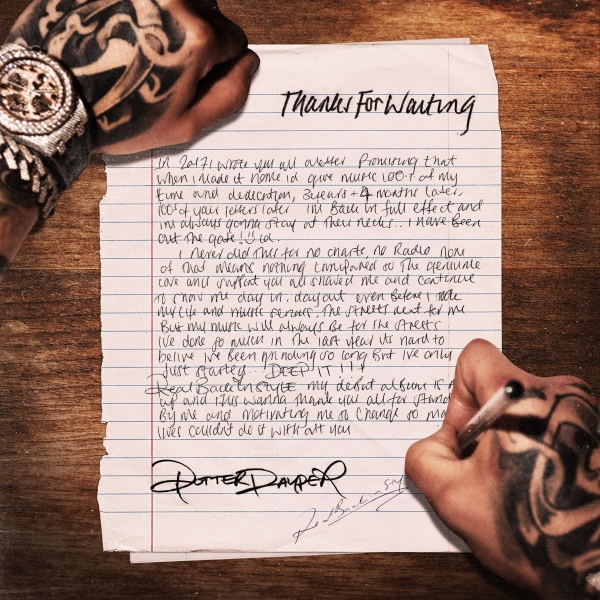 Releasing over a hundred tracks over seven years (not counting features or freestyles), one of the most respected and supported voices of the underground UK rap scene and a fresh signing to 0207 Def Jam, Potter Payper’s Thanks For Waiting is the final piece of his ascendant 2021.

Keeping within his wheelhouse of themes, narrating his rise from rapping on the streets to rapping for the masses, with his gritty flow and raw vocals Potter delivers another extensive project. Refusing to soften or sugarcoat his approach, there isn’t anyone that sounds like Payper in the food chain.

Coming across like the Tarantino of the streets, Potter’s pen paints a vivid picture, and having gone three rounds of training (Training Day mixtapes 1 2, & 3) he now has a bigger platform to showcase his gains and bask in the win of the coveted ‘Mixtape of the Year’ for TD3 from the GRM Daily Rated Awards. Featuring a massive 12 features on this project, Thanks For Waiting is a far cry from a one-off feature he would have on past EPs and mixtapes. It’s enough to make any skeptic consider if the project would rely too much on the charisma of other artists and not centre Potter as the main protagonist of his story. Over 18 tracks, Potter’s voice remains the loudest and while he does not stray away from his formula, there are also some highlights in terms of production and direction with tracks.

Tunes like “Plain Clothes” Ft. NSG, “Foreva” Ft. Smurke and “Never” Ft. Haile offer listeners a different Potter Payper track while still being true to himself. But the songs that still stick with you are clear Potter Payper belters like “Eastender” assisted by Unknown T, “Rappers” with KO and “Gangsteritus” Ft. Tiggs Da Author.

It’s clear that with the backing of a focused label such as 0207 and the renowned ferocity of Potter Payper’s conviction there will be many more projects built to shake the rap game to its core. Thanks For Waiting is the beginning of a new chapter.