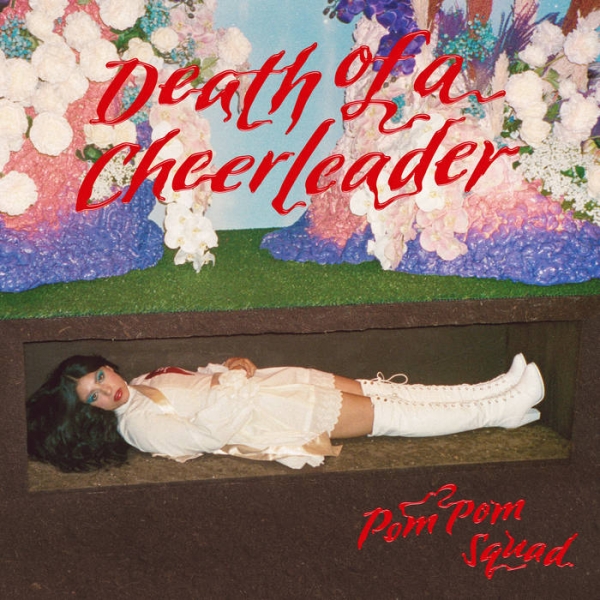 In the opening and closing scenes of Pom Pom Squad’s music video for “Lux,” the titular character — Lux Lisbon of the 1999 film The Virgin Suicides, played by Pom Pom Squad’s leader, Mia Berrin — wakes up on a football field, expressing confusion but not much else.

She is coming off a joyous night at her high school prom, where she won the title of prom queen and lost her virginity to the heartthrob Trip Fontaine. But the man she offered so much to seems to have unceremoniously abandoned her to wake up alone, and the heart wrenching loss that follows leads to Lux’s tragic ending. Later in the film, an older Trip reflects on his short affair with Lux: “Most people will never taste that kind of love. But at least I tasted it once, right?”

The movie itself doesn’t give way to any of Lux’ inner thoughts; instead, the bulk of it is narrated by her neighbors, adolescent boys with a fixation on her and her sisters’ lives. But in Berrin’s “Lux,” she has a clear, strong voice, and it is screaming to be heard. “You can take my peace / Leave me rotting like the leaves / But I won’t ever let you say / You cared about me,” she growls over a searing roar of punk, giving agency to a character who never had the chance to reopen her heart, an overgrown romantic perpetually stuck in the suburbs.

Pom Pom Squad’s debut full length, Death of a Cheerleader, also sounds perpetual - a floating anomaly in a television full of static. However, its sonic space is not stale but revelatory, grouping the romantic pop of the ‘60s with loud riot grrrl punk anthems and softer, modern indie rock. At each turn, Berrin — along with her bandmates Shelby Keller on drums, Mari Alé Figeman on bass, and Alex Mercuri on guitar — subvert expectations, all the while converting the pain points of adolescence and the boredom of high school suburbia into whimsical fantasy.

It helps that “Lux” was written when Berrin herself was a teenager, dangling on the cusp of adulthood and uncertain where life would take her. She initially released a demo version of it on Bandcamp while attending a prestigious acting school, and the unexpected traction it got marked not only the beginning of Berrin’s career, but an eagerness to explore more of those hidden boundaries between pubescent longing and adulthood. Earlier EPs took those themes to the extreme, unpacking depression and heartache, but not much else. Death of a Cheerleader takes a step back to roam over the whole of a young person’s identity, but the songs still pack a heavy punch. This is no doubt helped by Sarah Tudzin of Illuminati Hotties, who co-produced the album with Berrin and adds a chaotic air to these structurally great tracks.

The motown girl group-esque single “Crying,” for example, borders cinematic nostalgia with eerie grunge, sounding more dystopian than pleasant despite its gentle swing: note the lyrical callback to the controversial Crystals track in the first verse (“It hits me and it feels just like a kiss / They said, ‘just write a song and you’ll get over it’”). On the opposite end are solid punk tracks, thrashing bursts of righteous anger, Berrin acting as both nightmarishly gleeful in “Cake” and woefully self-indulgent in “Shame Reactions.”

But in running the full gamut of young identity, there is pure, unfettered joy to be found even in the depths of rage. Lead singles “Head Cheerleader” and “Red With Love” not only capture desperate longing and pleading adoration, but highlight the queerness that Berrin newly brings to the project. In “Head Cheerleader,” her voice rings matter-of-fact in the face of hetero absurdity, announcing “I’m gonna marry the scariest girl on the cheerleading team.” The phrase cuts against mainstream depictions of high school love in film and TV (the too on-the-nose "But I’m a Cheerleader" aside), but Berrin is content to create an entirely new dimension here.

Portions of Death of a Cheerleader sound as if plucked from a different fabric of reality, like the looping, hypnotic lullaby of “This Couldn’t Happen” (an interpolation of Doris Day’s “Again”), and the album’s beautiful closer, “Be Good.” That track picks up a theme from the album’s thirty-second intro, a sweet, inviting vibraphone melody, and expands into a sweeping orchestral ballad that could easily fit anywhere into the Brill Building Pop of the ‘50s-’60s. As it ends, static surrounds its edges, a reminder of the dreamscape we’re in. The song fades with murmurs of floating gratitude, drifting into the clouds above a dreary football field, waking up a teenage girl from a long dream.