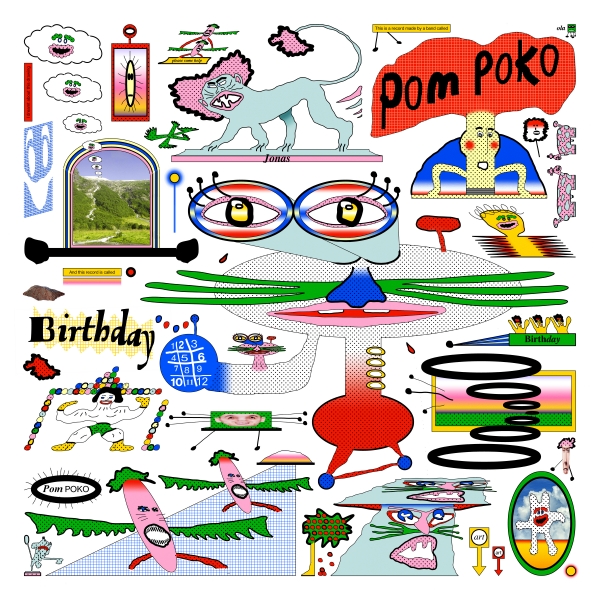 Norwegian four-piece Pom Poko go for broke on their debut album, throwing everything they have against the wall with precision and abandon.

“That’s about twenty records in one, isn’t it?” enthused Miranda Sawyer about the appropriately named Birthday single “Crazy Energy Night” on Steve Lamacq’s Roundtable on BBC Radio 6 back in January. Final marks were high all around, and Sawyer was quick to get the gist of Pom Poko’s modus operandi. They excel at keeping their foot on the accelerator, making only sporadic but controlled use of the brake. In the space of a single song, the results can be thrilling, quirky, or often a combination of the two. Stretching such an approach to fit the attention span of a full album doesn’t always satisfyingly translate, but for the most part Birthday paces itself as well as it can.

Conservatoire-educated and named after a surreal Japanese animated film from the 1990s, Pom Poko live up to their pedigree. Their technical prowess comes through straight away on the opening “Theme #1” with its dizzying guitar shred. Throughout the album, even when the dynamic shifts and tempo changes feel impulsive, the skillful playing of guitarist Martin Miguel Almagro Tonne, bassist Jonas Krøvel and drummer Ola Djupvik proves otherwise. Lead vocalist Ragnhild Fangel Jamtveit swings flexibly around the high clipped style of Deerhoof’s Satomi Matsuzaki and the pinched quiver of Joanna Newsom, but also to lower, fuller tones such as the R&B-esque flow she finds on “My Work is Full of Art”.

“I want you to stay here / I want you to love me,” Ragnhild pleads in that song, one of Birthday’s stand-out tracks. Returning to that sentiment, the penultimate “If U Want Me 2 Stay” has an insistently pulling groove as the rhythm section goes deep in the pocket. There’s a sensitive soul underneath Birthday’s hyperactive bounce, and it tends to come out clearest when Pom Poko find a sweet spot and stay there for a minute.