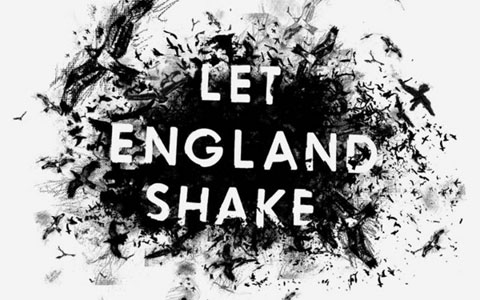 While this current batch of songs are inspired and influenced most often by the horrors of World War I, we have been living in a time of war for nearly a decade now, and it’s obvious that Harvey has had her eyes wide open, poetically documenting the devastation and bloodshed of modern day warfare while also making a direct correlation to the violent, contentious history of England and her countless allies and enemies. We’re forcefully repeating the mistakes of our turbulent past, and stubbornly learning nothing in the process other than the sting of loss and the bitter cost of war. But Harvey isn’t wagging her judgmental finger at society with these songs, though, far from it. She is instead stoically and elegantly documenting the days when the dancing has stopped and the bloom has fallen off the last living rose, and in the process has crafted an album that difficultly defines our troubled times while also offering hope that out of these dark days something beautiful can be born.

The album opens with the familiar strains of The Four Lads’ novelty hit ‘Istanbul (Not Constantinople)’ plunked out on a xylophone (the first of many overt nods to other songs threaded throughout the album), a lighthearted start that belies the anguish and ache found at the heart of the stirring numbers that follow. And that refined, stylish balance between the light and the looming darkness is a trait that continues throughout the record, for while the lyrics are remarkably heady and often quite grim, the austere, inventive melodies and Harvey’s sprightly autoharp (and saxophone!?) bring some much-needed buoyancy to these incredibly weighty songs.

After castigating the West for being asleep on the title track which opens the record, Harvey pleads for England to get their blood boiling again and not fall into that same trap. It’s a challenge that perhaps she knows England won’t necessarily rise to, suggesting that the next logical step is to “pack up your troubles, and let’s head out.” But where we should go from here is never made clear, as Harvey deftly illuminates her questions and concerns about our modern plight, but the thorny solutions to get us out of this mess that we’re in aren’t provided, only adding to the sense of distress and frustration that permeates the work.

And if Polly believes the West is indeed sleepwalking through this era, she doesn’t find that Europe is doing its part either, lashing out at them at the start of the dazzling ‘The Last Living Rose,’ “Goddamn Europeans. Take me back to beautiful England, and the grey, damp filthiness of ages and battered books.” Not necessarily a ringing endorsement of her homeland either, proving that we are ultimately all culpable for the current sad state of affairs, and while we try and see our way through the muddle, Harvey’s lyrical mirror is turned on all of us to see just how we react to the momentous trials of our times. The emphatic cavalry call of the trumpet that is layered through ‘The Glorious Land,’ proves to be slightly distracting within the forlorn confines of the song, but is the most obvious of the many wake-up calls that Harvey repeatedly has threaded through the album, trying desperately to rouse us out of our placid slumber before the blood drenched battlefields overrun our countrysides once again.

Harvey is supported splendidly by her trusted cadre of  John Parish, Mick Harvey, and Flood, who provide rich, nuanced textures to these numbers, subtly adding depth when the music demands it, while never getting in the way of Harvey chasing after her muse. Their skillful touch allows these songs to truly swing, and under less capable hands the somber subject matter would drag the tracks down and crush their enduring spirit. They also provide some of the lighter moments on the record, playfully echoing Eddie Cochran’s ‘Summertime Blues’ to offset the gore and wretchedness that pervades ‘The Words That Maketh Murder,’ and providing a wicked backbeat over the looped sample of Niney the Observer’s ‘Blood and Fire’ on the hymn-like ‘Written On The Forehead.’

But this record ultimately reflects Harvey’s singular vision and artistry, and her indomitable spirit colours every aspect of this release. Her doleful, haunting lyrics are never heavy-handed or stilted, meshing exquisitely with the strikingly imaginative arrangements while only adding to the saturnine mood of the music. Harvey carries ‘England’ entirely on her own, turning the song into a desperate love-letter to a homeland she can’t imagine quitting, and absolutely soars on the seething ‘Bitter Branches,’ which subtly hints back to her fiery four-track demo days.

Throughout her 20+ years in the music industry, Harvey has never been tethered to either expectations or traditions, boldly flouting predictability and practice with her fearlessly experimental sound, while consistently confounding critics who never quite know what she’ll do next. And this album is clearly no exception, dealing candidly with the horrors of war while also remaining quite tuneful and harmonious. No easy task, that, but Harvey’s never been interested in anything that comes easy.

And while all of this talk of blood and death might be a touch too drab and joyless upon first listen, especially for a music world that doesn’t necessarily want to have a news broadcast sung to them, Harvey handles these bleak subjects with her standard grace and boundless ingenuity, while also challenging herself to come up with something truly original and surprising in the process. Like Goya, Picasso and Dali before her (whose paintings Polly drew inspiration from), Harvey was able to weather the malicious winds of war and turn it into something beautiful and moving in the process, a record that will hopefully outlast and even mollify the pain that the current conflicts have caused.

All of that results in as difficult and demanding a listen as you’re bound to get from a modern pop record (at least since White Chalk), but one that is ultimately quite rewarding and uplifting despite the dour undertones. Let England Shake is anything but conventional or contrived, another bold, confident release by an artist that continues to amaze and astonish us all, no matter how ready we claim to be for her continual right turns. This record is quite simply a work that is unlike anything that has come before it, and since Ms. Harvey refuses to ever repeat herself, it’s surely unlike anything that will come after it as well.