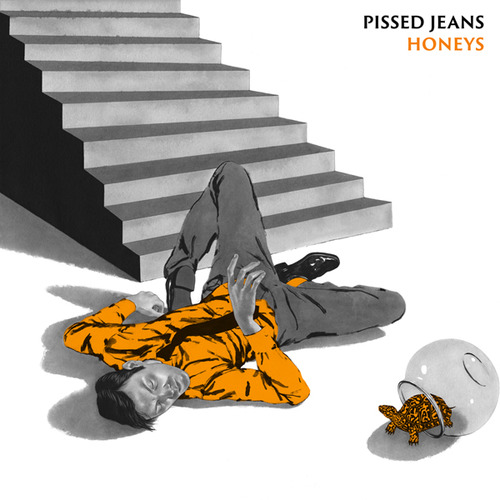 Whilst usually it’s a rule that repeating oneself is a musical crime on a par only with repeating things other people have already done, Pissed Jeans don’t come across as overly bothered with rules. Honeys, their fourth album (and third for Sub Pop), not only has them residing in pretty much the same sonic territory they did when they first emerged with Shallow in 2005, but also mining the same ground for inspiration – the likes of The Melvins, Black Flag and The Jesus Lizard (especially The Jesus Lizard). Despite the people they draw influence from being some of the most innovative in their field, Pissed Jeans’ music is anything but progressive. Everything here has been done before. What then, if anything, makes Honeys worth bothering with?

Well listen, this isn’t something that’s said lightly, but if this were a Jesus Lizard album, it’d be one of their best (not quite Liar or Goat, but definitely up there with Down or something). Pissed Jeans sure aren’t inventing a sound here, but they’re honing it to levels of almost painful intensity, the mixture of focused conviction and unbridled passion with which they throw themselves in to these songs making the fact that they sound like ones you might have heard before somewhere totally redundant. When it’s not a really scary record, it’s a really fun one, and most of the time, it’s both.

Honeys is an album that lives on the edge, man. Or at least grew up there. There are a lot of songs here about ageing, about still wanting to kick ass despite the fact that you’re emotionally, physically or mentally exhausted. At times, it’s hard to tell whether frontman Matt Korvette’s screams are ones of manic pleasure or born from being on the brink of collapse. Its best track is its opener (the highly addictive tale of curious house party etiquette – “I saw you in the hallway, screaming!” – that is ‘Bathroom Laughter’), but its worst track is still pretty excellent. I’m not even sure if there is one, truth told.

Though there are no total left turns, there is at least some variation in the sound and pace – we go from the hilarious sludge of ‘Cafeteria Food’ to the ballistics of ‘Health Plan’ via a mixture of almost doom-like metal and crusty, rapid punk rock without batting an eyelid (I don’t think Pissed Jeans ever blink). Of course, they’re best suited to breakneck numbers like the desperate chaos of ‘Romanticize Me’, but their ability to not let the intensity levels every drop below 100% even at their slowest (‘Chain Worker’ being Honeys’ most languid but still just as unnerving moment) is really quite remarkable.

Though it’s been nearly ten years since their formation, Pissed Jeans continue to burn so bright that it’s difficult to envisage them having a career that lasts too much longer. Bands like this aren’t meant to last long. Their demise isn’t something I want to accelerate, but nor do I want to hear their acoustic record, an ill-advised synth direction, or any flirtations with world music… I just want them to kick out precisely these kind of jams, the kind lesser bands should never be trusted with.