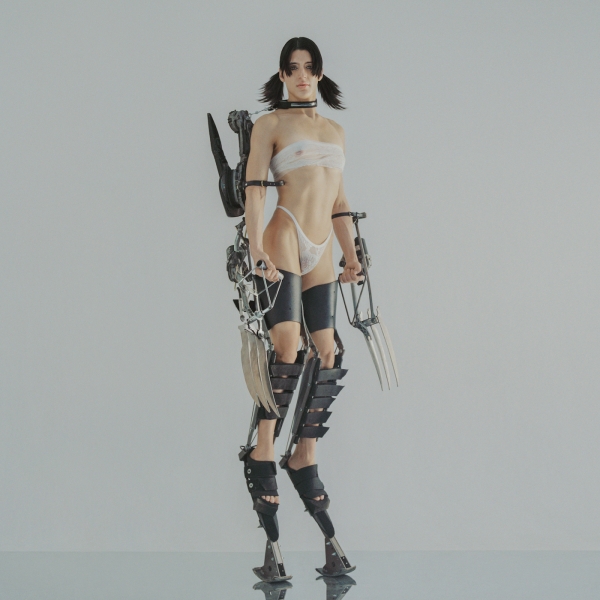 The likes of SOPHIE, Flume and AG Cook have helped shape the sound of today’s musical landscape with production for pop titans like Kesha, Kanye West and Charli XCX to Mercury nominees like FKA Twigs, but whose names wouldn’t make the average listener bat an eyelid.

Chief among these is Arca, the Venezuelan producer and performance artist who’s unique blend of schizoid break beats, warped sound-play and intense, non-binary sexuality produced several of the best mixtapes of the past decade, and made Björk and Frank Ocean come knocking.

On her early releases Arca was anonymous, represented by the gross and beautiful avatars of Jesse Kanda, her mixtapes sometimes named only by symbols. It was a dramatic change of pace then to hear Arca begin to sing on 2017’s third, self-titled album. Now on KiCk I - her voice hear clearly and with that stunning album cover - she is truly front and centre. As with collaborator FKA Twigs, it is inspiring to see an artist who started the last decade defined by their outsider-status and hidden between several degrees of mystique present herself so proudly. Opening song “Nonbinary” is a brand new direction, a rapped cut featuring machine gun blasts and heavy braggadocio. “Bitch, I'm special, you can't tell me otherwise / That’d be a lie / Who do you think I am? / It’s not who do you think you’re dealing with, no / ‘Cause you're not "dealing with” / There’s no deal”.

On a human level, to hear someone perpetually defined by otherness rap with a swagger usually found in hyper-masculine, bling-era rap is inspiring, and the song’s very existence feels part of a cultural shift. Yet the music itself could have been produced by any number of Arca’s contemporaries: the beat is sparse and unremarkable, and when a producer is known for a sound which felt like one of modern music’s few true, new ideas; disappointment is unavoidable.

There are far stronger songs: “Rip The Slit” is a furious and kinky banger which puts front and centre Arca’s aggressive attitude towards gender, and she sings in a girlish tone which is at once sweet and sinister. And while Arca’s temperamental vocals are one of the things which holds her sung work back, “No Queda Nada” is a sensual and tender ballad which proves that Arca doesn’t need bombast to thrive.

KiCk I is a consistently enjoyable, so the fact it still feels like something of an anti-climax is testament only to Arca’s history of braveness and originality. Lead single “Time” boasts a throbbing synth and shimmering pools of white noise which would have felt alien fifteen years ago, but in 2020 just make for an aimless pop song. Also problematic are the use of features; Arca has earned a rare Björk feature on her record, but “Afterwards” would be as unremarkable a song on a Björk album as “KLK” would be on one of Rosaliá’s, and so these songs simply act as frustrating asides, distractions from the most compelling songs here which tell us more about the woman who stands so boldly on album’s cover.