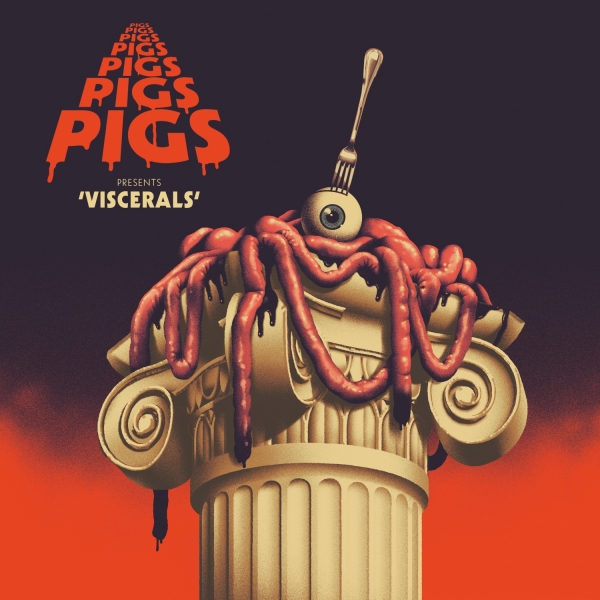 It’s taken three records, but we’ve finally got a Pigsx7 release with a track list longer than their infamously protracted name.

2018’s lauded King of Cowards may have built upon the trio of riff-dense tracks which constituted the band’s 2017 debut Feed the Rats, but it’s Viscerals’ spread of eight which wins the gong.

From the demonic thrall of opener “Reducer” to closer “Hell’s Teeth”, the slight increase in terms of tracks however does little to disrupt the most crucial constant: this is still undeniably Pigsx7. The Newcastle quintet continue to rain hell down upon their blossoming fanbase, their now staple style of dark, formidable and strangely accessible metal is as exorcising as at any point of their career so far.

Since the release of their debut, Pigsx7 have regularly faced comparisons to Motörhead and Black Sabbath, and these are unlikely to stall with Viscerals. Brimming with bass and guitar lines that linger on the precipice between stoner/sludge and power metal, and often jump resolutely between the two, this isn’t a comparison however that the band have attempted to shake off, and even appear to have invested in. The filthy, gnarly riffs underpinning the mechanical “New Body” are methodical in their carnage, as the band’s iconoclastic vocalist, Matt Baty, details both his debauchery (“I’ve had too much to eat, too much to drink / I’m dancing with the devil with two left feet”) and gradual dissociation with his own body. While he’s yet to decapitate a living creature on stage, Baty and his motley crew still clearly, and willfully, tread the well-worn path laid down before them.

This point, as with Pigsx7’s previous two records, however is largely obsolete in light of their pure commitment to churning out heavy, high-calibre metal. Rarely do you encounter a piece of music as crushingly affective as “Halloween Bolson”, a disturbing malaise of riffs and Baty’s yelping sure to leave listeners breathless and bruised. Even the short industrial interlude, “Blood and Butter”, puts you at unease as the narrator draws the analogy between hateful news and a “tapas meal”, giving even the most delicious of meals an unwholesome and gruesome aftertaste.

It isn’t often that metal is as direct and exhilarating as it is on Viscerals, and despite a series of songs concerned with the more unsavoury facets of life, there is a furious energy at the heart of the record it’s hard not to get swept up in. It’s a feature that has established itself firmly in the band’s repertoire to date, and it’s reassuring to note that despite the burgeoning tracklist, Pigsx7 don’t seem to be changing anytime soon.