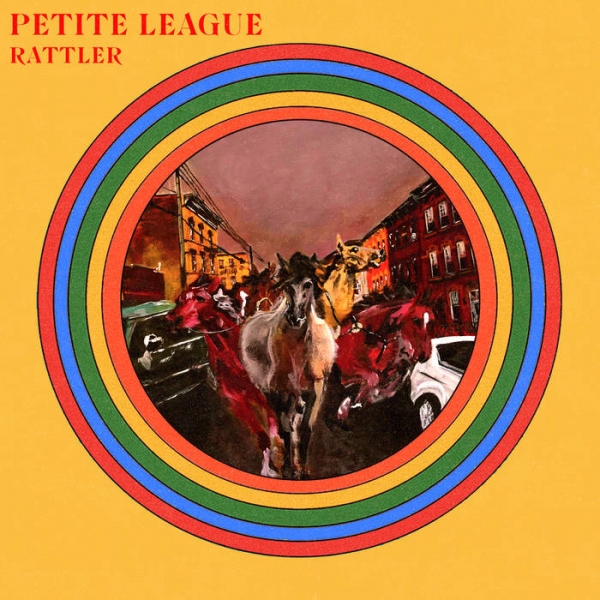 Returning with their fourth record in as many years, the Brooklyn-based quartet flesh out their strain of lo-fi slacker-pop with increasing levels of self-assurance, harnessing tight staccato rhythms with uninhibited college rock vivacity.

Their first release on self-owned label Zap World Records borrows the up-tempo riffs of Rips One Into The Night and No Hitter, propelling a pared-down undiluted garage-rock sound, verging between Japandroids and Beach Fossils with a restlessness born out of pure indie chutzpah.

Formed while attending Syracuse University, Lorenzo Gillis Cook and Henry Schoonmaker’s project has, with the recent addition of Adam Greenberg and Dan Pugh, grown in membership but crucially maintained the stripped-back, nostalgia-tinged ethos that has proved their hallmark. A brief hiatus, if anything, serving as a springboard for a rejuvenated, increasingly confident approach, lending further definition to their established sound. The raucous reverie of “New York Girls” crystallises the agile energy of Rattler, bleeding with lyrics steeped in retrospective yearning: “California Dreaming of New York girls / twilight of your golden years”, evoking the equivalent of a weathered Polaroid photo; a frayed DIY aesthetic that remerges, permeating the album with a palpable urban summer fog.

Recalling The Strokes’ angular guitar precision and the jaunty vocal harmonies of Tokyo Police Club, “White Knuckle Wildflower” reliably justifies its title; a jagged highlight that heralds an unhindered state of liberation: “It's gonna get easier some day when you walk away from everything”. “Limewire Virus” finds the outfit, without becoming truly derivative, skewing between The Replacements and Yo La Tengo for inspiration, drawing on a frayed alternative template, seeing the band securely in their element. The bittersweet spark of “Yung Bubblegum” embodies the coming of age heart pumping at the album’s lyrical core; its fizzy jangle-pop melody summoning a reverb-drenched contemplative appeal.

Rattler represents a robust addition to Petite League’s growing discography; each track figuring as a standout, with the four-piece adhering to an endearingly stark indie-rock blueprint, firmly stamping their own identity and committing to an independent spirit in the process.