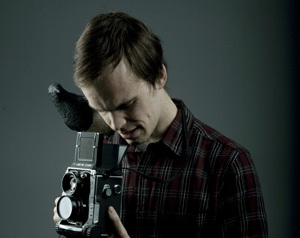 These Walls of Mine is the latest in Peter Broderick’s string of vaguely conceptual releases, and one which he says is ”… best viewed as a collection of lyrical and vocal experiments… held together by a dialogue of voices. Conversations with myself and with others. Several tracks contain lyrical contributions from friends and strangers, made possible with the help of the internet”. That’s a fairly accurate disclaimer and this drawing of inspiration makes for an album as uneven as you might expect.

Ironically the most rewarding exercise here comes from Broderick alone on Parts 1 & 2 of the title track. In the first section he speaks directly and plaintively to the listener. Part 2 simply recites the same spoken words, but this time he decides to “just get a little bit of music going” and a stuttering beat and staccato strings suddenly transform his ramblings into a flow as the song assembles before us brilliantly. There are other good tracks here too. ‘I’ve Tried’ is a beautiful softly smoldering bit of ambient alt-pop, and the popping low end of dulcet looping basslines and skittery percussion on ‘When I Blank I Blank’ is great, even if the fan-submitted lyrics are not. The a capella closer ‘Til Danmark’ is more like the kind of experiment he does brilliantly; a soulful little vocal line filled out with harmonies and finger clicks.

‘Freyr’ is the unfortunate end of the spectrum, a thoroughly self indulgent track in which Broderick recites an e-mail from his father eulogising their missing cat Freyr. “It was a truly magical cat” he rues (and Peter goes on to sing for us), and whilst I have no reason to doubt the cat’s sleight of paw skills this is probably not befitting of a song, at least not verbatim. Similarly ‘I Do This’ is a dialogue between Peter and his blog and Flickr commenters about why he makes art which quickly descends into some pretty dreary territory and unintentionally sums up its own naval gazing pointlessness with the line “I think this risks turning into a philosophy seminar”. Yes, quite.

In the last 5 years Broderick has churned out a few folksy full length records, some solo piano recordings, a contemporary dance soundtrack, two limited pressings of some film score outtakes, a cassette of “duets between two instruments”, a sprawling 30 minute composition about sleeping and then more. Last year it was an album called http://www.itstartshear.com – an album that’s a website, and a website that’s an album, he enthuses on the website (that is not an album) on which he will sing an admittedly quite catchy URL at you. Whilst stuff like that might be new and different, it is also exceedingly daft, and if his quest for the conceptual continues then I wouldn’t be surprised to find him crooning Twitter timelines before long.

All of this begs a question of quality control, and it is his downfall yet again here as a handful of good tracks and some terrible filler lead to the whole being an arduous experience. It would be far more satisfying to hear Broderick satiate his songwriting gifts with more of the directly emotive work he delivered so well on the records Home or How They Are. As it is though, this is one for the completists only I’m afraid.