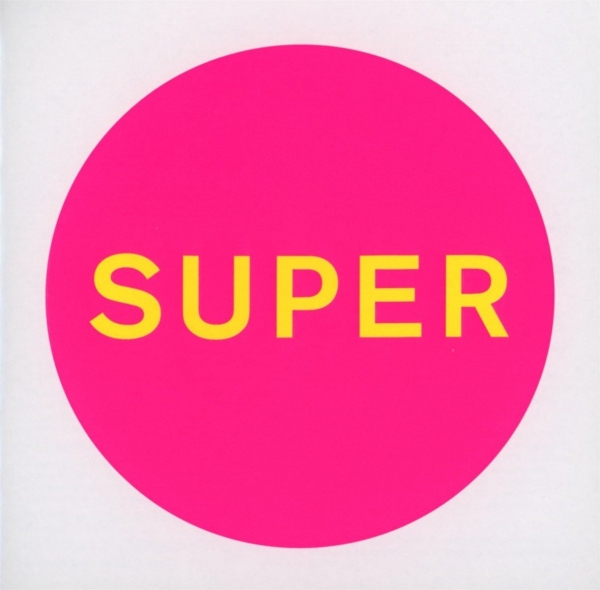 If you’re a fan of a band who’ve recorded 12 albums, two B-side compilations, a ballet, film score and talking piece He Dreamed of Machines about Alan Turing, then you’ll need to ask what you hope for from their 13th.

As with the pure electronics of, well, Electric, Super finds Neil Tennant and Chris Lowe reunited with Stuart Price in an ongoing response to 2012’s lushly reflective yet poorly received Elysium, which found the pop purveyors boldly facing their age.

Electric sold well, so Super returns to these dance roots that Price evidently believes they belong to. However, it’s a good thing PSB don’t do comebacks, as it’s a shaky start. Fans anticipating a tuneless (mainly) instrumental, juxtaposed with a C&W hoedown chorus, EDM drum builds to nowhere and malfunctioning synths, will be line-dancing to opener "Happiness" (that and revisiting the 90s hit "Cotton Eyed Joe" by Rednex).

Thankfully, for the rest of us, decorum is recovered by "The Pop Kids", which explores an alternate musical heritage led by Bizarre Inc’s "Playing with Knives". Lyrically, it’s another salvo on rock’s pomposity; akin to 1993’s "Can You Forgive Her?". It’s insanely catchy, yet as the surging 90s house piano sinks into folding harmonies and gorgeous "I love you"s, it’s soon stained with their typically gentle melancholia of irretrievable days (and nights). There’s even a knowing nod to the past, with "remember those days" underpinned by a "West End Girls" cowbell. Elsewhere, Electric’s bells (replicating those of Madonna’s "Open Your Heart") have been replaced by pounding piano and such a frenetic pace that one grows concerned for Neil Tennant’s heart rate.

However, issues with Super‘s commitment to electronic purity and avoiding strings/guitars are exposed on "Twenty Something", which needs a lushness to underpin the biting lyrics; Price’s opening riffs sound as cheap as the discounts the song’s protagonists need to survive on. Thankfully it builds into the track it could have been, but flirts with the fear that this album is not quintessentially PSB; that it could have been made by anyone.

The first half is as reliable as political promises. "Groovy" lives effortlessly up to its name; you can feel the club jostle, strobes and scoffing at the expensive bar while you drink water, even if you are listening in your company car. Its bells are glorious, and despite being throwaway, Daft Punk would have a massive hit with it.

Things continue to improve with the gorgeous, niggling synth line of the reflective "Dictator Decides", which echoes the imperialism of 1988's "I’m Not Scared". It’s a foreboding tune that erupts into an operatic sunset, reminiscent of what makes them so unique, and it's crying out to be extended. It’s followed by more novelty experimentation with "Pazzo!", which sounds like the coda to New Order's recent "Tutti Frutti" - no bad thing, depending upon your mood.

Longstanding bands often lose sight of what makes them great. Pet Shop Boys’ frustrating habit of using great songs as B-sides never helps, although ironically this is where their reputation prevails; as the best B-sides band of all time. But ever more important is choosing the right producer, and here Price has smoothed off their edges to embrace dance like never before.

"Inner Sanctum", opens the second half; its paean to solitary happiness and bangingly dated trance, like Faithless never went away, is a guilty pleasure, although the underpinning haunting Kraftwerk rhythm track feels like a missed chance. There are shades of the Empire of the Sun throughout, particularly on the throbbing "Say it to Me", but it’s the sumptuous summer romance of "Undertow" and Italo-disco of the pulsating "Burn" that stick, although there's no escaping the sound of generic Italo-disco.

Sadly, too many "Opportunities" here are missed ones. They’re better suited acting their age; a song called "Midlife Crisis" wouldn’t seem out of place. There’s so many dated drum builds that Price presumably has one as his alarm clock.

That said, Super is a grower – a brave rejection of pipe and slippers, embracing the mythical dance floor with admirably vacuous experimentation, even if it mines the mid-nineties, when dance music grew least interesting. It veers from the irritating to the irresistible. The good songs could easily be extended, while others shortened, if not removed completely.

They say fun never lasts, which in this case, might be for the best. As the rave ballad "Sad Robot World" and break-beat of "Into Thin Air" perfectly capture, there’s an urban sadness at the heart of this band, and it’s a shame that Stuart Price often misses it. The dance tracks blend into one, but any album judged against such a magnificent back catalogue as the Pet Shop Boys' has much to live up to.