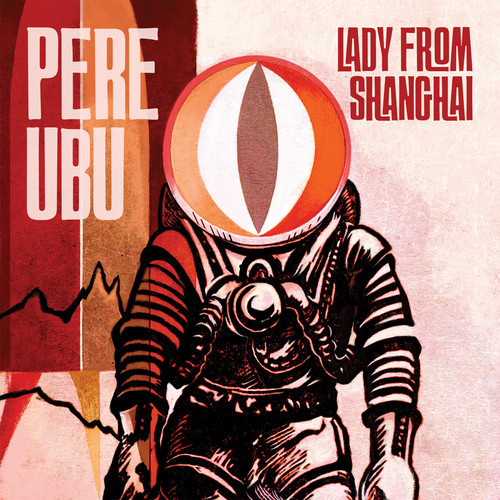 If their fifteenth album Lady From Shanghai is their definitive answer to that question, it’s as curious a reply as their initial efforts ever sounded. It is rock music – sort of – but devoid of so many of its defining characteristics that the label only applies because it fits them slightly better than any other. Its gentle musical cacophony is tipped over into truly scary territory by the lyrics of sole constant member David Thomas – all delivered in murderous mumbles and frustrated, elongated moans – transforming Lady From Shanghai from a run of the mill quirky rock album into a thrillingly worrying piece of art.

Everything here that appears normal on the surface reveals itself to be deeply disturbed with only minimal investigation. For example, that is indeed the melody from Anita Ward’s sugary pop classic ‘Ring My Bell’ they’re aping on the opening ‘Thanks’, but “You can go to he-eh-ell, go to hell” are the words this time making up the altogether more devilish chorus. The sentiments don’t get much lighter – ‘Musicians Are Scum’’s title is the least aggressive thing about it, and the story of waking up wondering whether you might have severely injured someone in ‘414 Seconds’ proves a particularly difficult but rewarding listen.

Elsewhere, the monolithic groove to epic standout ‘Mandy’ – my first favourite song of 2013 – might have feet tapping from the outset, but by now you’re very wary of the motives behind a track that speaks at such length about being on a bus on the “outskirts of nowhere” before imploring you to “come out to play” so relentlessly that it becomes more of a threat than an invitation. It’s a jaunty enough little number though, and indeed Lady From Shanghai is not all doom and gloom; ‘And Then Nothing Happened’ is both the album’s most melodic and straightforward moment, and most reminiscent of older Pere Ubu material – the kind of thing Bloc Party started their career by paying a lot of attention to.

New bands mightn’t be taking too many cues from Pere Ubu these days; they’d get laughed out of Rough Trade for even attempting to sound this weathered, worried and authoritative. But Pere Ubu thrive on being the last guys standing. For some, having contemporaries goes hand in hand with having competition, which drives many forward to make greater art. Pete Ubu’s enemies are more abstract than other bands – they’re complacency, obviousness, repeating the past. In defeating them, they seemingly need no competition other than themselves.