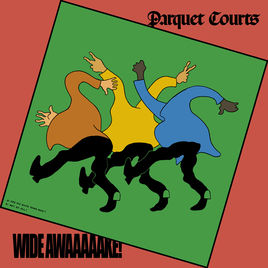 Parquet Courts are relentless: in sound, ideology, tour schedules and release frequency. There’s always something by someone in the band about to be released – and that’s why it’s so surprising that they’re always so goddamn incredible.

Light Up Gold introduced the world to their unique blend of SST hardcore, Pavement slacker-jams and Velvet Underground chug. It also contained the vast majority of their best songs. Sunbathing Animal was harder and meaner that its immediate predecessor, but it also displayed some refinement and a honing of their sound. Human Performance, though sometimes criticized by members of the band as having too many ballads, was a quantum leap forward in terms of songwriting – particularly on songs like “Dust” and “Berlin Got Blurry”. That’s without even mentioning EPs, or the A. Savage and Daniele Luppi records from last year or so…

So when this new record, Wide Awake!, was announced as being produced by Danger Mouse, there were immediate reactions of both joy and dread from the fans. Joy because Danger Mouse is no schmuck, but dread because, maybe, the erstwhile super-producer might try to mess with the Courts’ tried, tested and true sound.

Well, he has, and he hasn’t. This is the most diverse record put out under the Parquet Courts banner – not least because it contains a selection-box of lyrical interests and musical pursuits that include the revolutionary Dutch football method on “Total Football”, to the G-Funk-via-The Stranglers vamp of “Violence”. You read that correctly. On the former, Savage goes deep into the nuances of defenders, sweepers and strikers playing in a gorgeous union, a collage of fluidity. On the latter, you get some of the craziest sounds ever committed to a Courts album – from voodoo organ to rumbling dinosaur bass. More on the lyrics of that song later.

And just past the mid-point, something stupid happens. Not stupid in the dictionary sense, but stupid in the way Will Smith once tried to explain to Carlton Banks – Parquet Courts pull a joker from the deck, to maddeningly cool results: the title track, “Wide Awake!” sounds like the mutant offspring of Remain in Light-era Talking Heads and their funkier offshoot Tom Tom Club. It’s clear that Parquet Courts are evolving.

To top it all off, how about “Almost Had To Start A Fight/In And Out Of Patience”? It’s one of the greatest slices of hyper-literate street punk since... forever. The first half is a venomous, muscular monster, where Savage wields the lyrics like weapons – spitting them out with bile and a sense of the dread and horror of modern life. The second is a Feelies/Modern Lovers hybrid with a riotous bassline and Savage moaning about how he doesn’t have enough patience to share. We can tell, Andrew. We feel you.

It’s no enormous stretch to say that Savage is possibly the finest lyricist working in rock and roll today, and he’s certainly one of our most engaging vocalists. His gruff, grumpy sprechgesang is fast becoming his secret weapon, where before he wielded it in only the most functional of ways.

For some context, here are some example lyrics: “Savage is my name because savage is how I feel when the radio wakes me up with the words ‘suspected gunmen’” and “Overdraft charges from beyond the grave” and “My name is a warning for the acts that you are about to witness, which contain images some viewers might find disturbing”... and these are all from the same song (“Violence”).

Unfortunately, Wide Awake! isn’t Parquet Courts’ best album. However, the correct conclusion here would be to repeat what Robert Christgau once said about The Clash’s Sandinista: “if this is their worst - which it is, I think - they must be, er, the world's greatest rock and roll band.” On this evidence, Parquet Courts deserve similar plaudits.