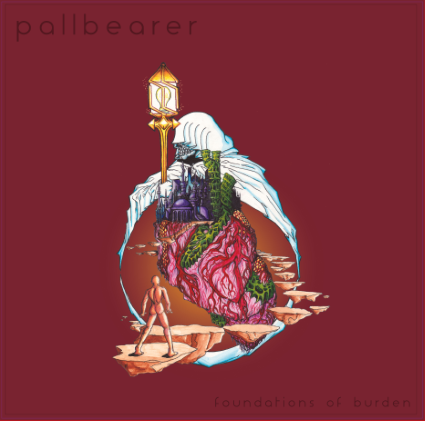 Five years ago, I proclaimed Mastodon as the “most aptly named band in all of music.” That was when they made metal records. Now, they swim in the current of radio rock and no longer deserve such a title. Enter a new contender: Pallbearer. The job of a Pallbearer is, literally and figuratively, to move forward in the presence of death. They must stand tall in the face of such a situation, even as the weight of such sorrow can potentially split concrete.

That, or any of the dozens of riffs Pallbearer offers on its fantastic sophomore effort, Foundations of Burden. You see, the

Rock quartet do doom metal better than just about anyone else in the genre. They mix the crushing, cold-storage riffage of stoner metal with the psychedelic interludes of, well, classic Mastodon. As “Foundations,” featuring some of the album’s heaviest (and best) moments, comes out of a series of Tokyo-destroying down-strokes and cannon-fire percussion, singer/guitarist Brett Campbell proclaims, “We shall build here/In this cursed place/Cruel structures/The towers of gods.” Later, he acknowledges (and reluctantly accepts) that their existence may have been built on sand: “Sick corruption in the fountain of life /It will sustain us/Was there even a choice?” To Pallbearer, riding the line between light and dark - rather than, say, choosing between them - seems to be the only choice offered: “Without light/The dark encloses all,” sings bassist Joseph Rowland. And later: “Without dark/The light burns out our eyes.” That certainly explains their approach of soaring leads that wish to rip holes in space/time over moutain-spliting riffs: In order to appreciate one, you must have the other.

It makes sense, then, that among five towering compositions you find a beautiful, three-minute, keyboard-driven song called “Ashes.” Easily the most somber track here, it finds Rowland at his most opaque: ” And one day soon the sun will fade/A gift unto the ashes.” Does he mean literal ashes after a nuclear winter? Are the ashes some sort of sci-fi entity? The lyrics are never clear on this. What is clear, however, is that it’s as perfect for pallbearing as something as clichéd as “Dust in the Wind.” Or, as Rowland sings, ” Then souls set free amidst the gray/Lifted through the ashes.”

So, would it be appropriate to play Foundations of Burden at a funeral? Probably not. Metal isn’t generally welcomed at such gatherings, even if it may offer some form of release. But perhaps the kind of catharsis found in Pallbearer’s music is meant to be found at home with a pair of headphones. Perhaps the heavy and the soft create some kind of yin and yang - some balance that can’t be avoided, only accepted: ” Where lays our heart of hearts defined/My darkness and your light, still yet remain entwined.”