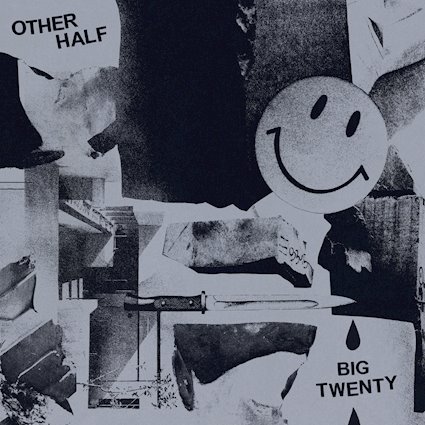 Despite the triumphant, almost valedictory connotations of the title Big Twenty, it only takes a couple of tracks into Other Half’s debut to realise this isn’t a band in any kind of celebratory mood.

Having knocked around as a trio for a few years now, members Cal Hudson (guitar, vocals), Alfie Adams (drums) and Sophie Porter (bass, vocals) are also known for performing in bands such as Maths and Ducking Punches, highlighting the talented musical chops Other Half have in their ranks. Drawing on post-hardcore luminarees, notably the sensual atmospherics of Deftones and the untethered assault of Touché Amoré, Big Twenty paints a bleak and largely hopeless picture of young life ensued in a triangle of drugs, depression and bad intentions.

Hudson’s performances and lyrics are particularly vivid. Adopting a strong use of repetition throughout the record, his torrid tales are disconcerting in their abrasiveness. “Trance State”, one of the singles from the record, depicts the zombification of a person following a destructive capitulation to drugs. Hudson’s cries that “it doesn’t seem so clever, when it bites you back” make clear the discrepancy between short-term pleasure and long-term pain, a visceral story not hampered by its familiarity.

His persistent suspicion that there is underlying, malicious intent lurking in every conceivable crevice further adds to Big Twenty’s sense of discomfort. The painful, invasive connotations of “I can feel it in my bones/White worm” on “White Worm” reflect this most uncomfortably, while on tracks such as “Building The Brand” and “Community Spirit”, he takes a less abstract, if no less devastating, swipe at the lack of spirit and manipulation prevalent throughout society.

The dynamic between Hudson, Adams and Porter sparks and agitates throughout Big Twenty. While predominantly drawing on post-hardcore, the trio also showcase a penchant for the moody ambience of The Pixies (closing of “Sameness Without End”) and the swagger of Thin Lizzy (“Tiny Head”). Second to last track “Sticks At The Side” is particularly evocative, marrying a discordant approach musically with a crackly spoken-word performance by Hudson. Even as tracks such as “Heads Go Soft” lack the melodies of, say, “Brain Food”, the proficiency and pure force go some way to compensating.

Largely, it is that brute force which prevents Hudson and co. crawling into a ball and giving up. Relentless in their frustration at events unfolding around them, Other Half’s world is volatile and dark, but also enthralling to hear the band dictate it. Life may be shit, but based on Big Twenty, that doesn’t mean the trio are going down without a fight.