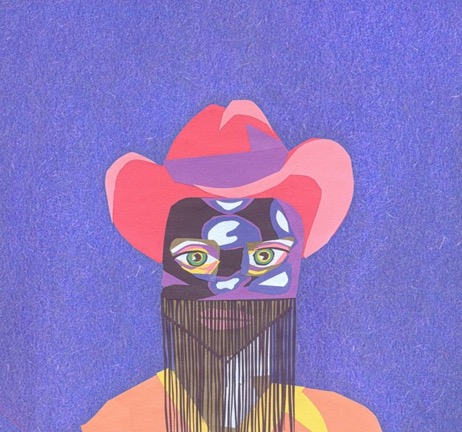 Country music artists, so long renowned for a stubborn lack of innovation and an unwillingness to experiment, have undergone a kind of creative renaissance in the past few years, so that now the market is flooded with country music that caters for just about every taste.

Whether your style is more Lil Nas X’ country-fied pop trap, or Colter Wall’s stoic neo-traditionalism, or Charley Crockett’s pitch-perfect retro revivalism, or Sturgill Simpson’s restless rockist anthems – there feels like there’s limitless momentum behind the genre, driven primarily by artists who sit outside the mainstream.

Nobody exemplifies the tension between tradition and innovation more than Orville Peck, the fringe-masked queer icon whose high and lonesome style evokes Roy Orbison, The Jesus & Mary Chain, Joy Division, and the cinema of David Lynch. In his review of Peck’s debut album, Pony, Tristan Gatward wrote that Peck had laid claim to being an “anti-hero, steeped in mythology and a necessary anonymity”, who had laid the foundations for a “queer country revolution” – and he was completely correct. Not only is Pony a fantastic album on its own terms, it’s made even more important by its landmark status in the queer country canon. With this new EP, Show Pony (delayed a few months so that Peck could devote time to supporting the momentum of the renewed civil rights movement in America), Peck has the mainstream in his sights.

Shania Twain’s importance to this release cannot be overstated. Not only is their duet, “Legends Never Die”, the most rock-radio-ready anthem Peck’s ever released (it’s the same kind of arena country peddled by Bon Jovi), but her appearance lends starpower to the release, and it’s certain to bring in new fans. The video, featuring Shania in her signature leopard print, is also fantastic.

The other five songs on the collection slip seamlessly back into the serene (if a little gloomy) sound you know and love from Pony. The wistful, heartstopping power ballad “Summertime”, and the simple, restrained cinematic delights of “No Glory in the West” complement the deep, dark recesses of “Drive Me, Crazy”, which evokes both Chris Isaak and Bruce Springsteen. Peck’s gorgeous baritone is sumptuous throughout, at once both nostalgic and eerily modern in its power and emotive power.

The lo-fi, simple atmospherics of “Kids” is another perfect complement to the haunting, voodoo Elvis take on Bobbie Gentry’s “Fancy”. If you were to draw a Venn diagram, with one circle titled ‘gothic rock’, and the other ‘classic country’, “Fancy” would sit right there in the middle (no doubt astride a lustrous, tall black steed).

When the inevitable unmasking comes (and I do believe it will be soon), it shouldn’t be that big of a deal. While some might see the mask as a gimmick, one listen to Show Pony proves quite the opposite: the mask is a cypher that allows you to see disparate elements of your own psyche in Orville Peck. He is a true, wonderful artist that seems – on this evidence – to be on a one-man mission to take country out farther into the wilderness that its ever been. Make sure you’re along for the ride.