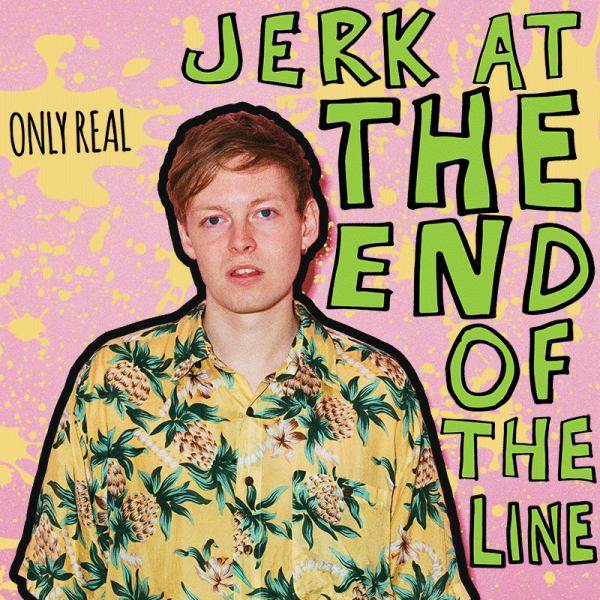 For South London’s Niall Galvin, conformity is clearly not something to be admired. As the slack-jawed enfant terrible Only Real, he merges cheeky Britpop, the wooziest psych-rock and ‘90s hip-hop, creating something wholly riveting, drenched in his own wry outlook and devil-may-care attitude. It might sound like he’s borrowed a few leafs from the book of Jamie T. or Mike Skinner, but with his experimental rap etc., he’s got more in common with Damon ‘Gorillaz’ Albarn than Damon ‘Blur’ Albarn. ​

King Krule is another name that’s been bandied around with Galvin’s moniker, but it’s reductive to assume that just because they’re both red-headed gobshites that they make the same kind of racket. Krule plumps for garage-y somnambulisms, while Only Real’s world is laced with melty acid-tinged pop. Galvin can be just as self-deprecating at times, but instead of dwelling, he choose to gloss over for the sake of the audience. Yeah, he’s pained – growing up sucks, don’t it? – but he’s here to make people sing, make people dance, and make people smile.

On his debut LP, Jerk At The End Of The Line, Galvin’s disparaging self-aimed jibes and rowdy bounce is tempered by an innate charm. “Can’t Get Happy” sees him overtly explore depression – “I stay asleep to stop the worst/think it might not be the weather/I lay defeated, not the first/this time things ain’t getting better” – in the wake of heartache. He’s spiteful, dour and troubled, but with dreamy brass-style synths, calamitous drums and an acute sense of rhythm, Galvin strips the cut of sadness, and creates an anthem for cider-swilling crowds with peeling necks and last night’s puke encrusted on their wellies.

“Yesterdays” is gorgeous; again, the timbres belie his lyrical solemnity – Galvin’s remarkably selfless really, choosing to make peppy pop for the masses instead of sulking in Tantrum Central. On one hand, you might think he’d be consummate pain in the ass to be around, but when he demonstrates this kind of side, you get the impression he’s probably the best friend you’ve never had.

Speaking to us in 2013, the then-21-year-old told of the meaning of “Backseat Kissers”: “It’s about embracing the days,” he said. “Not sitting back and watching them go by but immersing yourself in the current and the real exhilaration you get when you do that. It’s about youth and it’s about fun.”

It’s pretty representative of the record. Regret avoidance, damage limitation and a penchant for ‘the now’ are omnipresent, and any angsty desire to wallow is shattered by a greater desire for hedonism. Not unadulterated orgies of sex, drugs and rock’n’roll, but an easy-going longing for happiness and contentment; this is a summer wiled away at the beach, or spent driving across the country with pals on a whim. Saying all that, there is one hint that this repression isn’t doing wonders for his psyche. The final track, “When This Begins”, jars somewhat. Synths drip like dank sewers, Galvin’s vocals surrender to an opiate vortex, and the guitars prick and prod rather than coax and soothe; instead of the lyrics contrasting with the summery noise, they match. It seems that only one thing has the ability to cause so much upset: “Time moves much quicker now/it never used to move so fast/I guess we’re all grown up.”

Silence, dry textures and tension are not his hallmarks, but as Jerk At The End Of The Line draws to a close, Galvin succumbs to adulthood, and offers a tantalising cliffhanger. As great as this album is, there’s an inkling it’s one big setup for the next, much more complex step, and that’s very exciting.