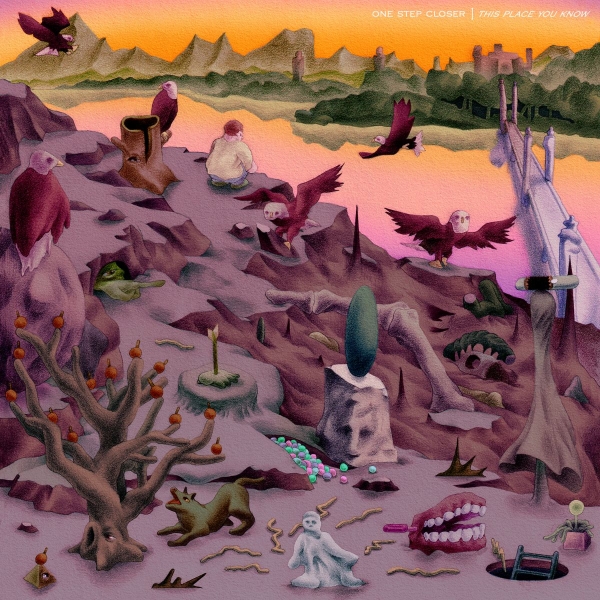 With the release of their 2019 EP, From Me To You, One Step Closer quickly established themselves as post-hardcore’s newest darlings.

Demonstrating an appreciation not just of the mid-00s scene, with heavy inflections of Have Heart in particular, but also the earnest fury of older forebears such as Rites of Spring, From Me To You secured a space for the Pennsylvania newcomers in what was already a saturated scene. This Place You Know explores the same notions of disillusionment and apathy, though with an articulation and ferocity that marks this excellent young band as distinct.

Incorporating at times both the furious outpouring of Frameworks and early Pianos Become The Teeth, at others the swagger of Turnstile, This Place You Know wrestles with the conflict of home. Rejecting notions of connection and comfort, it is instead an attempt at understanding stagnation and the want for something more, a desire to explore beyond the confines of what you know, and dealing with the fact that everything changes over time.

While not breaking particularly new ground, One Step Closer display their wares with a feverish passion, the peak being the intense introspection and furtive energy of lead single “Pringle Street”. “Why does it feel like no one cares?” vocalist Ryan Savitski shouts, a cry into the void as he grapples with the dichotomy between familiarity and an overwhelming sense of loss. “Home For The Night” tackles a similar theme, the band concluding resolutely “I’m never coming home”. Savitski’s struggle to ascertain what home is in its purest, most honest form is one felt viscerally, not just in his lyrics but in his performance, a searing, pained showing that puts him up there with the genre’s most lauded vocalists.

There are nods to a wider concept of belonging littered throughout the record. On “Lead To Gray”, which opens with the band’s obligatory combination of a flurry of distortion and drums before settling into its groove, sees Savitski battling a haunting past, despairing as he calls for his subject to “Forgive me, whatever it takes to be alive”. Despite the woe, One Step Closer do however advocate for the necessity of feeling something on “Chrysanthemum”. The declaration during the spoken word intro that “To make yourself feel nothing, so as not to feel anything? What a waste”, while in keeping with the record as a whole (after all, what is post-hardcore if not an encompassing and cathartic expression of emotion?), it is surprising to see it articulated in such a way given the anguish displayed elsewhere. As the rest of the track subsequently erupts in a more typically post-hardcore style, it nonetheless adds another layer to Savitski’s deliberating as to what it is that truly defines a place.

And that’s where This Place You Know’s beauty lies. One Step Closer have moved beyond the physical into the abstract of home, the multitudes of associations and relationships and expectations that converge to create a place where we feel safe. At a time when many have become increasingly confined to the place where they reside, this appreciation of its complexity feels all the more pertinent.