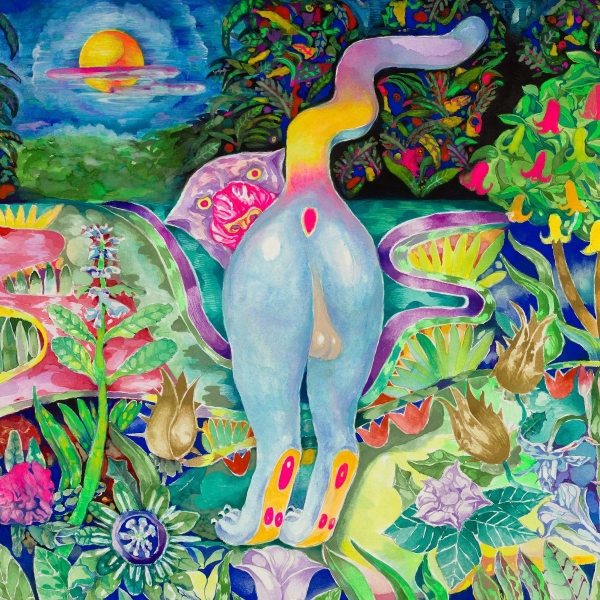 It seems the only thing more certain for Osees (see also Thee Oh Sees, Oh Sees, OCS, etc) than altering monikers, is dogged experimentation. Throughout their expansive discography, left turns are aplenty. Despite constant pivoting, with creative figurehead Jon Dwyer’s well-documented lust for free artistic expression, the band consistently seem to drive forward. Their tools for achieving such a dynamism are equally well mapped, as the band interlope like sonic backpackers between gap years in garage rock, sabbaticals in psychedelia and vacations in krautrock, prog and metal.

Their most recent outing, Protean Threat saw Osees once again scramble a smorgasbord of musical totems into some semblance of a cohesive, yet still multi-hyphenate record. Panther Rotate serves as an investigational echo to this, by reworking tapes from album sessions, gathering field recordings and testing technological trickeries to form something that transcends its original implementation. Agitative undulations, jittered signals and synthetic ambiance are all bountiful across the record, as it delivers an altogether different dimension.

Tracks like “Scramble Experiment” don’t stray too far from traditional Osees milieu with motoric, krautrock dynamism embellished with reversed guitar melodies and various found sounds. It’s percussive approach, together with Avant-grade frills and rickety atmosphere make it feel like the ominous soundtrack to some demented fairground ride. The Zappa-esque “Terminal Experiment” bleeps, bloops and blurps its way into existence with occasional decorations from funk-laden basslines and high-frequency mechanical trills while “Don’t Blow Experiment” has no other outcome than to concur with Can’s Tago Mago.

At the opposite end of the records axis, “Synthesis” marvels in a newfound layer of electronic exploration. It revels in a Kid-A style ambiance and sounds like the ambient drone of “Treefinger” took a wrong turn and somehow got stuck in Dwyer’s lo-fi lamentations. While “If I had An Experiment” sees perhaps the clearest, and also perhaps the most accessible moment of this project’s intentions come together. Its undeniably kinetic bassline, crushed, reverb-laden drums together with electronic eccentricity, echoes of Tame Impala just prior to their full-on divebomb into mainstream pop.

With change being the one consistent thoroughfare across their discography, coupled with an unrelenting output, it’s understandably difficult to keep up with Osees. This record certainly makes things no clearer, but like standing and observing any great work of art, it’s true intentions and artistic merit might not become immediately clear. Only upon repeat experience may the true extent of its merit reveal itself.